The Cosmic Ghost! A ghostly face with glowing eyes in a haunting Hubble photo 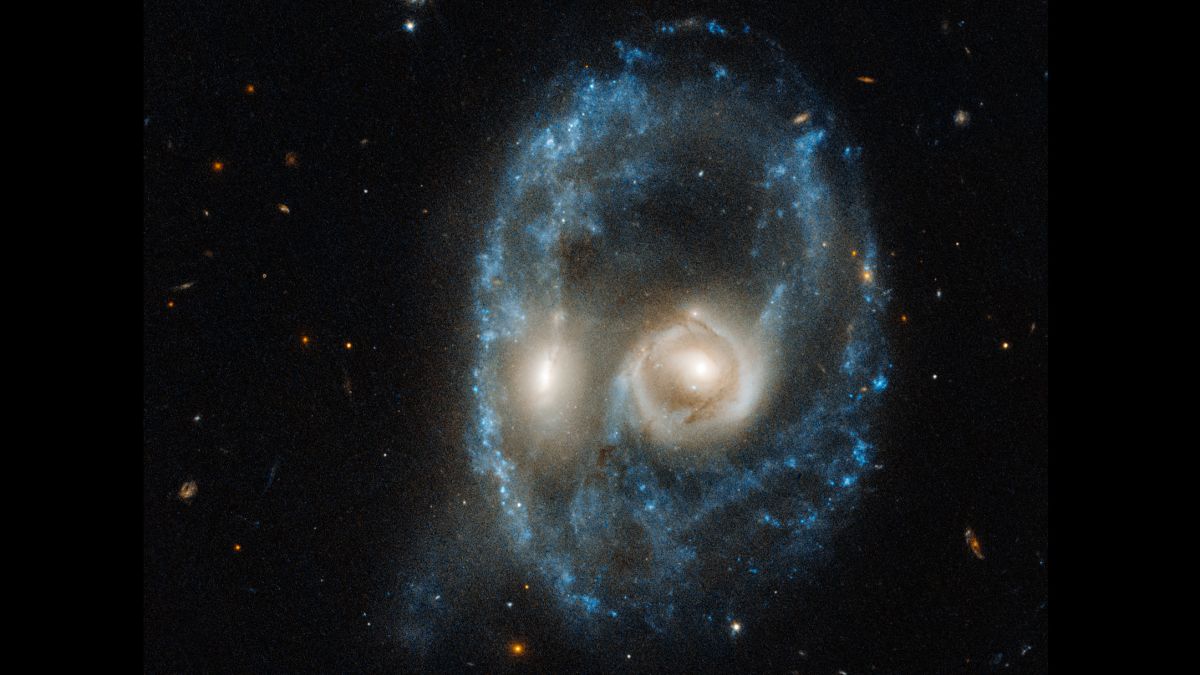 The piercing "eyes" of this fearsome cosmic face are the bright nuclei of two distant galaxies in the middle of the head – when they collide, mouse from the stars of their respective galactic discs.

A ring of young blue stars outlines the shape of a sinister face, while dense lumps of stars come together to form his nose and mouth.

Video: Check out Hub's awesome new image just in time for Halloween
Related: These scary things in Space will chase your dreams

This ghostly mantle will not be staring into space forever. The structure of the ring, which outlines the face, will last only about 100 million years, while the merger of the two galaxies is expected to take about 1 billion to 2 billion years, NASA officials said in a statement.

While collisions with a galaxy are quite common in the universe, collisions with a head such as this are relatively rare, and the particularly violent nature of this type of collision gives rise to a distinctive ring shape. "The galaxies must collide in exactly the right orientation to create the ring," NASA officials said. "The crash pulled and stretched the discs of gas, dust and stars of the galaxies outward. This action forms the ring of intense star formation that shapes the nose and face."

But this rare galactic ring is not the only thing that makes this pair of merging galaxies special. While most collisions with a galaxy involve a larger galaxy that erects a smaller neighbor – even our own galaxy. The Milky Way is to blame for galactic cannibalism – the two galaxies that merge here seem to be about the same size. In other words, there aren't many pairs of symmetrical "eyeballs" that ride through space.

Video: Magnifying the awful looking twins for Halloween in his book The Catalog of Southern Special Galaxies and Associations (Cambridge University Press, 1987), Halton Arp and Barry Mador. Arp-Madore 2026-424 is about 704 million light-years from Earth in the constellation Microscopy.

Hubble scientists captured this image on June 19 as part of a snapshot program that explores unusual interacting galaxies. These observations will help NASA select targets for its Hubble Space Web telescope James Webb, scheduled to launch in 2021.