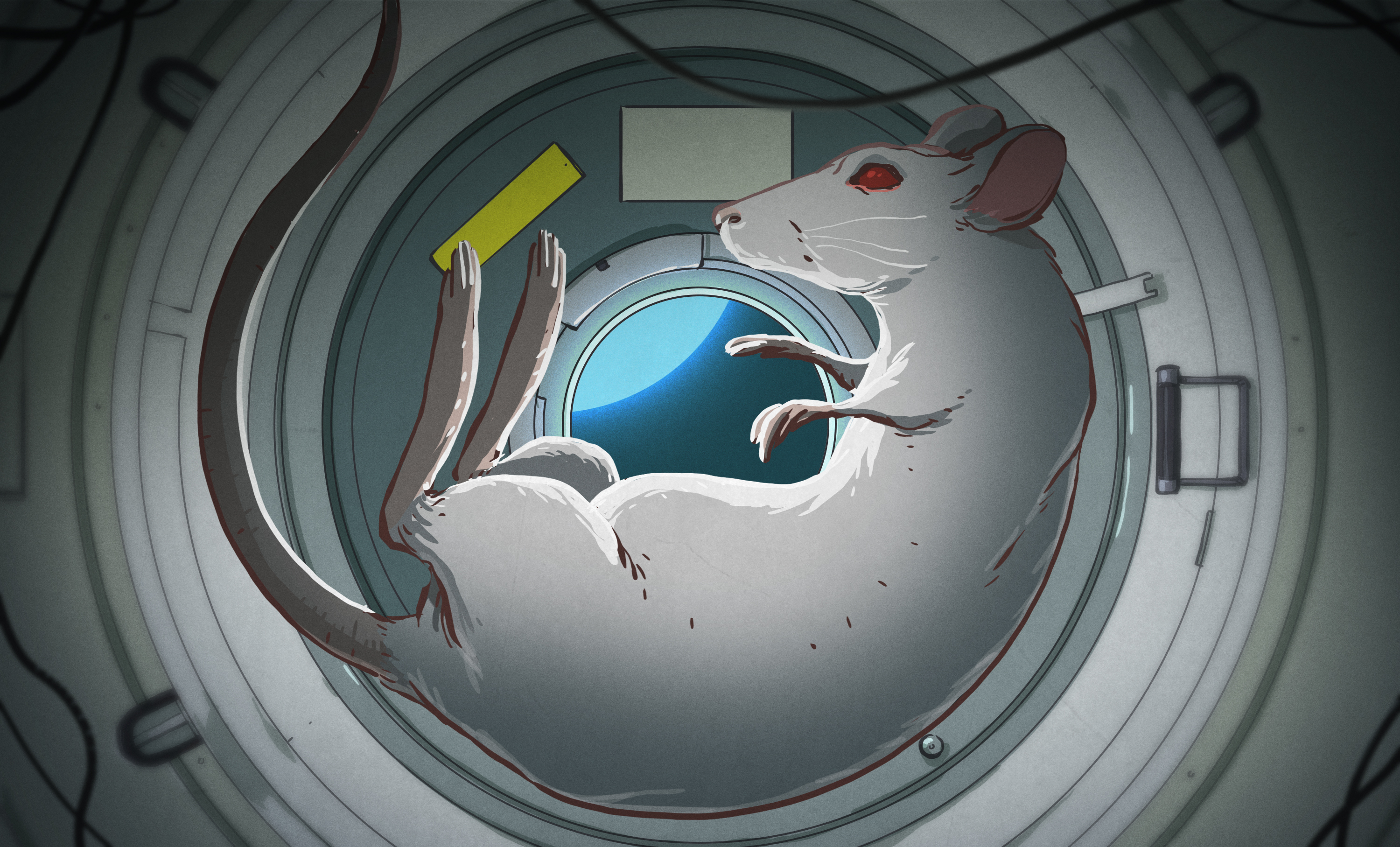 The International Space Station is the most expensive membership in humanity’s gym.

From the earliest days of human spaceflight, it has been understood that longer journeys away from Earth’s gravity can have a detrimental effect on an astronaut’s body. Floating weightlessness invariably results in significantly reduced muscle mass in the same way that a patient’s muscles can atrophy if they spend too much time lying down. Without gravity to fight constantly, the astronauts’ leg, back and neck muscles will weaken from not being used for just a week. Although this may not be an immediate problem during spaceflight, astronauts landing back on Earth in this physically reduced state are at higher risk of injury.

Fortunately, this problem can be greatly mitigated by rigorous exercise, and any orbital spacecraft large enough to hold human occupants for weeks or months will necessarily have enough internal volume to equip it with basic equipment. exercises such as a treadmill or resistance machine. Virtually every space station since the Soviet Union, Salyut 1

in 1971, had some way for its occupants to train while in orbit. This is no substitute for being on Earth, as astronauts still return home weaker than when they left, but it has been shown to be the most practical approach to combating the grueling aspects of long-distance space flight.

Of course, there is an obvious problem with this: every hour spent in space exercises is an hour that can be better spent researching or maintaining a spacecraft. Given the incredible cost of not just putting a person into orbit, but staying there long-term, time is very literally money. Which brings us back to my starting point: astronauts spend two or more hours each day in the various fitness equipment on the International Space Station, just to avoid muscle loss, making it the most expensive fitness membership in the world.

The ideal solution is said to be to design a future spacecraft with the ability to impart some degree of artificial gravity to its passengers by centrifugal force. The technique is simple enough: just rotate the vessel along its axis and the crew will “stick” to the inside of the hull. Unfortunately, simulating Earth-like gravity in this way would require the ship to be either much larger than anything humanity has ever launched into space, or to rotate at dangerously high speeds. This is a very risk for what is ultimately just a theory.

But a recent report from the University of Tsukuba in Japan may represent the first real steps towards the development of practical artificial gravity systems aboard spacecraft. While their research focused on mice rather than humans, the results have a long way to go to codify what has so far been largely science fiction.

Perhaps the most interesting element of “Analysis of the transcriptome of the gravitational effects on the skeletal muscles of mice under microgravity and artificial 1 g onboard environment” is that initially researchers did not undertake to study artificial gravity per se. The goal was simply to learn more about muscle atrophy in mammals at the molecular level, as it relates to space flight of long duration. Traditionally, this type of research is done by sending a group of mice into space for a week or two and then comparing their muscle tissue with a group of control mice left on Earth. But the team realized early on that such an experiment was fundamentally wrong.

When there is a control group and an experimental group, the idea is to expose both groups to exactly the same conditions except for the one you want to study. This way, you can be reasonably sure that any changes you observe are caused by this one missing item. But with the classical approach to the study of rodents in space, this is simply not possible.

Think for a moment about the journey our experimental mice are facing. For a start, they will be launched into orbit with a rocket. It’s not exactly a daily routine for a mouse. While in space, they will live in a microcosm of the environment, artificially maintained by the spacecraft’s life support systems, and even with shielding, they will be exposed to some degree of cosmic radiation. At the end of their stay, they return to a returning spaceship and send them through the atmosphere to end their ordeal by diving into the ocean. Meanwhile, the control group had been sitting in a cage in a laboratory the whole time.

These are hardly comparable experiences. Some of these elements could certainly be simulated on Earth for the control group, but not with the degree of accuracy that would be needed to completely eliminate them. There are just too many variables in the game to rule out the possibility that they influenced the results of the experiment. What the researchers realized they needed was some way for the control group to experience all the same aspects of space flight as the experimental group, except for spending time in microgravity.

Their answer was the Multiple Artificial Gravity Research System (MARS). Using a small centrifuge, the Mouse Habitat Unit (MHU) aboard the International Space Station is able to rotate half the mice to a speed fast enough to approach Earth’s gravity. The other mice live at the bottom of the device, which is otherwise identical, except that it does not rotate. In this way, the researchers can be sure that all the mice in the unit were exposed to the same environmental conditions, minus the presence of gravity.

Even so, the paper explains that the comparison is not perfect. The control group still spends some time in microgravity, as there is no provision to provide artificial gravity while traveling to and from the SpaceX Dragon ISS. There is also some processing time before the mice can be removed from the Dragon and moved to the MHU when they first arrive.

The results of the experiment, which was actually conducted in 2016, are exactly in line with what scientists have believed for decades: mice kept under artificial gravity during their stay on the ISS did not have the same muscle loss as those in microgravity . In addition, the expression of muscle in the genes was found to be different between mice in the control and experimental groups. This clearly suggests that the lack of gravity is the cause of the change, not cosmic radiation, as was theorized earlier.

There was little doubt that the generation of artificial gravity aboard the ISS was possible, and the fact that it prevented the degenerative muscle loss experienced in weightlessness was just as predictable. However, this experiment provided the concrete evidence required by the scientific method. Of course, more experiments will be needed to further expand our knowledge in this area, but for now it is safe to say that the rotation of a spaceship will indeed prevent the loss of muscle mass of mammals during long space travel.

While scientists can use a centrifuge to study the effect of gravity over 1 g here on Earth, there is no way to do it. reduction the influence of gravity in the laboratory. However, since the ISS is already experiencing weightlessness due to its location in orbit, a centrifuge can be used to create artificial gravity between 0 and 1 g. This puts MARS in a very unique position, as it can allow researchers to simulate the gravity of the Moon or Mars, giving us an idea of ​​how long their stay in these bodies would affect human physiology.

This is critical information that humanity will one day set up a permanent outpost on the moon or carry out manned missions to Mars. The only knowledge we have about man’s adaptability to lunar gravity comes from the relatively short stay on the surface during the Apollo program, and we have little idea how the human body will react to months or maybe even years on the surface of Mars.

The study could also have an impact on future space stations. What if you only had to simulate part of the earth’s gravity to keep muscle atrophy? Determining the minimum amount of gravitational force needed to slow or even stop the harmful effects of long-range space flight can make the production of artificial gravity much easier than currently thought.

At the end of the article, the researchers hint that this is exactly the type of experiments they hope to conduct in the future:

Although the current study was made possible by modern devices that apply an artificial 1 g of onboard environment to the ISS, future mammalian studies will confirm the effect of long-term habitation at gravitational forces less than 1 g, which is designed to simulate the moon’s gravity. and Mars, known as partial gravity. As experimental methods for space biology continue to evolve, future research may more strongly identify the root causes and suggest strategies to prevent muscle atrophy.