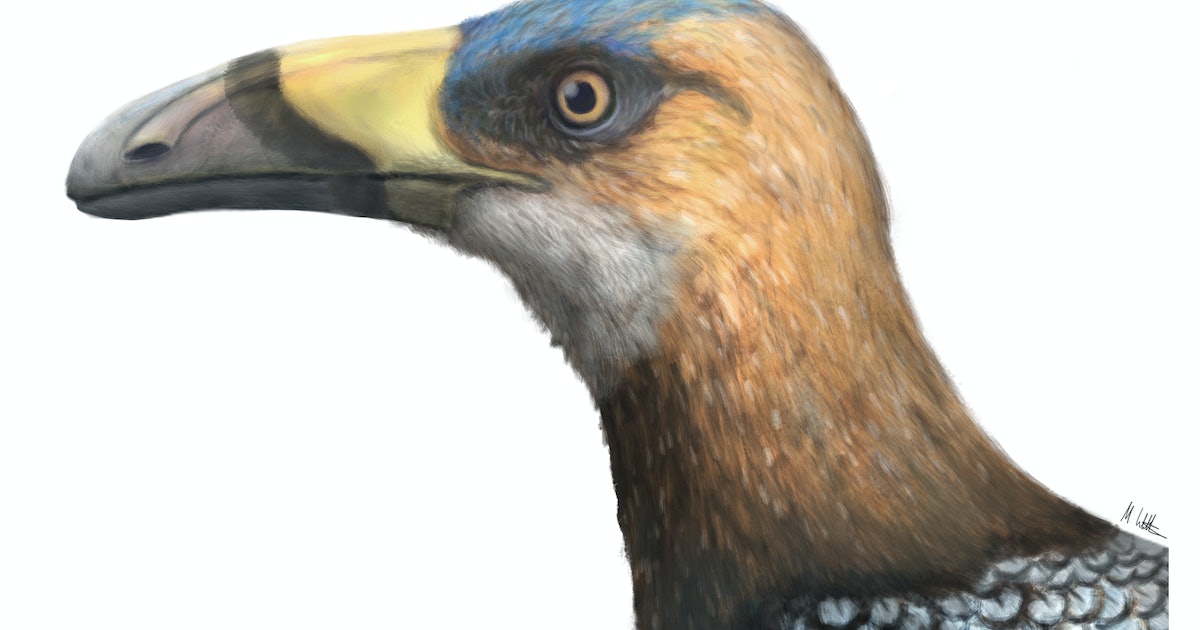 Every day, scientists discover shocking new information that changes our understanding of the ancient world.

The latest groundbreaking discovery concerns a bird from the end of the Cretaceous with a very large beak – so large that it outlines a new course in evolutionary history.

In a study published Wednesday in Nature, researchers describe a previously unknown species, Falcatakely forsterae, an ancient bird with an unusually large beak resembling that of a modern toucan.

Big Bird – Researchers first discovered the fossils of this unknown bird species a decade ago in Madagascar.

But the fossil specimen was fragile and contained very small bones, so it was not fully analyzed until 2017. But after the researchers analyzed the small fragments, they realized they had found something really special.

“As soon as we started carefully removing the rock around those delicate bones, it quickly became like ‘Oh, well, we have something really neat here,'” Patrick O’Connor, lead author of the study and professor of anatomy at the university in Ohio, he says Back.

After removing the scale, the scientists used microcomputer tomography scanners to collect data to simulate the creature’s skull in 3D. They then used 3D printing to build a replica of the bird’s skull.

“There’s a lot of digital modeling that just goes into understanding, do you know what the anatomy of this new animal is,” O’Connor said.

Researchers name the species Falcatakely (roughly meaning “little flying sickle”) for its uniquely shaped face. They classified Falcatakely as an enantiornithine bird, “a group of birds that were alive during the time of the dinosaurs,” O’Connor says. These birds often had teeth and claws on their wings. All known species are now extinct.

More, Falcatakely is unlike most other ancient birds, which also lived 65-250 million years ago. Although birds of this era – known as the Cretaceous period – had different body shapes when it came to their faces, they looked almost identical.

Face Time – But with its long deep beak, Falcatakely broke the mold.

“We see Falcatakely has a very different face shape than anything else it has to do with, “says O’Connor.

The large beak of this bird is more like that of modern birds.

This is a curious finding. Modern birds are much more diverse than the ancient ones in terms of their faces. Anatomy can help explain the difference between most ancient birds – with the exception of Falcatakely – and modern. It all comes down to a bone in their skulls: the premaxillary bone. Located on top of a bird’s beak, ancient birds did not seem to use this bone for food, while modern birds do.

“All this diversity in the modern shape of a bird’s face is really driven by a bone called a premaxillary bone,” says O’Connor. “And it’s the bone that makes all this crazy differentiation through development to give you the huge range of facial shapes we see around us today.”

Encouraged by Falcatakely’s unique face shape, the researchers wanted to understand “what is the driving shape of the face, not just in modern birds and in enantiornithine birds,” according to O’Connor.

They compare the bone structure of the newly discovered bird with other creatures – including non-birds, such as dinosaurs.

“We take a broader perspective to say, well, we can look at a full range of animals that are relatively closely related to each other. Some of them are modern birds, some of them are Mesozoic birds, and then those non- bird dinosaurs, which are the closest relatives of the bird’s ray, “says O’Connor.

They found out Falcatakely they may have had a similar appearance to modern birds as a result of convergent evolution, which occurs when unrelated animals develop in similar ways and share the same traits. But unlike modern birds, Falcatakely gets its broad beak by expanding the maxillary bone, another bone in the skull.

“The point of convergence is that it has this overall overall shape, but it doesn’t, by modifying the same facial bones we see in modern birds,” O’Connor said. Rather, the beak of this bird is closer to the structure of one of the most ferocious dinosaurs – velociraptors.

“It uses what we’ve described as a kind of primitive arrangement of bone structure that is more like things like a velociraptor or a microraptor.”

New way – The findings open a new path in fossils and reinforce scientists’ beliefs about what ancient birds may have looked like.

“We would never have predicted that something like this would have, you know, a big and big bill, and that it would be based on the maxilla, because we’ve never seen this in fossils before,” O’Connor said.

But more importantly, the study restructures our understanding of ancient birds and how they evolved.

“Birds living in the Mesozoic were much more diverse than we ever knew,” says O’Connor.

Summary: Mesozoic birds show significant diversity in size, flight adaptation, and feather organization 1–4, but show relatively well-preserved patterns of beak shape and development5–7. Although neornitin (ie corona groups) birds also show limitations on facial development8,9, they have relatively different beak morphologies associated with a number of food and behavioral ecologies, in contrast to Mesozoic birds. Here we describe a bird stem the size of a crow, Falcatakely forsterae gen. and others. November, from the Late Cretaceous of Madagascar, which has a long and deep tribune, an expression of the morphology of the beak, which was not previously known among Mesozoic birds and is superficially similar to that of various birds of crown groups (eg toucans). The Falcatakely’s grandstand consists of an expansive toothless maxilla and a small tooth-bearing premaxilla. Morphometric analyzes of individual bone elements and a three-dimensional tribune shape revealed the development of a neornitine-like facial anatomy, despite the retention of a maxilla-premaxil-like organization similar to that of non-avialine theropods. The pattern and increased tribune height at Falcatakely reveal a degree of developmental lability and increased morphological mismatch that was not previously known in early branched planes. The expression of this phenotype (and presumed ecology) in the stem bird underscores that consolidation to a neornitin-like, dominant domaxila tribune was not an evolutionary prerequisite for beak expansion.

A giant dead finback whale has discovered the Mediterranean