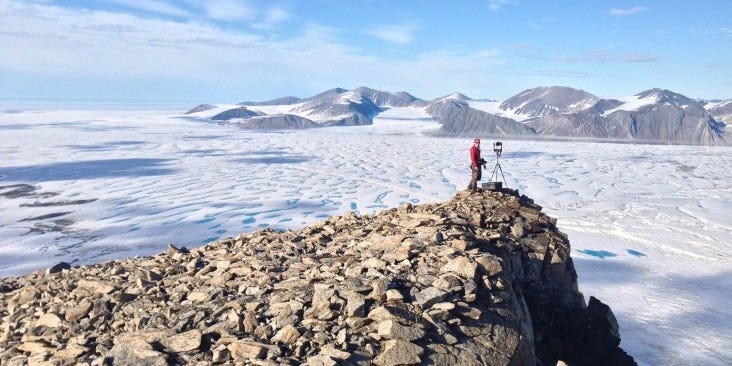 A large part of the last completely intact ice shelf in Canada, about 4,000 years old, has broken off, reducing the shelf by more than half, scientists said last Sunday. After separating from the shelf, the piece split in two, forming an iceberg almost the size of Manhattan.

Climate change is likely to fuel the collapse of the shelf, researchers say. This summer, temperatures in the region were 9 degrees Fahrenheit warmer than the 1

980 to 2010 average, Luke Copeland, a professor of glaciology at the University of Ottawa, told the Associated Press.

“Above normal air temperatures, sea winds and open water in front of the ice shelf are part of the recipe for ice shelf breakup,” the Canadian Ice Service said on Twitter.

A research camp was lost when the shelf collapsed, as was the last known epishelf in the northern hemisphere, a type of freshwater lake surrounded by ice that sits on top of ocean water.

“Whole cities are this big”

Located on the northwestern edge of Elesmere Island, on the Canadian territory of Nunavut, the Milne ice shelf may have collapsed on July 30 or 31, according to ice analyst Adrien White of the Canadian Ice Service. Satellite imagery shows that about 43% of the shelf has come off, forming pieces up to 260 feet thick.

“Whole cities are that big,” Copeland told Reuters. “It was the largest ice shelf left intact and crumbling at its base.”

Unlike glaciers that sit on land, ice shelves float in the ocean. They are usually hundreds of thousands of years old and thicker than sea ice. Before the Milne ice shelf crumbled, it was larger than DC.

Temperatures are rising faster in the Arctic

The Arctic is warming much faster than the rest of the world, a phenomenon known as polar amplification, and these hot temperatures are causing ice to melt. Today, for example, polar ice caps are melting six times faster than in the 1990s.

In Canada, there was a continuous ice shelf spanning the north coast of Elesmere, but the warming caused by man caused it to disintegrate, White said. Until 2005, Milne was “really the last full ice shelf,” she told the Associated Press.

While scientists considered Milne less vulnerable to collapse because it is protected in the Milne Fiord, the shelf has cracked over the years.

Creator of the most beloved comic in Latin America, Mafalda, Dies

Archaeologists have unearthed a buried massacre in Spain, bodies frozen in time