“The liberation of six decades of fear”: the lost revolution in Egypt Egypt 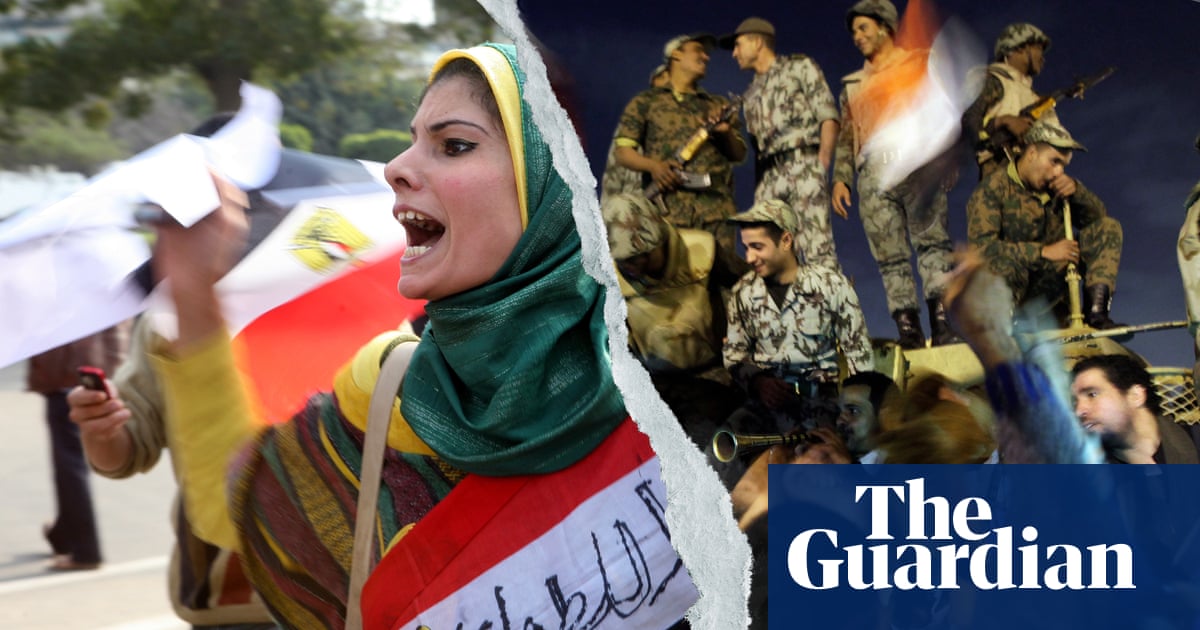 IIn the center of where it all began, Mansour Mohammed runs a tarpaulin stall on the only green grass amid miles of concrete and asphalt. For 10 days, he ate and slept huddled with strangers, associated with thriving anger and rebellion. Huge crowds rose and rose, roaring for demands for a change in the call that echoed through Tahrir Square in Cairo. “I will never forget that sound,”

; he said. “It was the loudest noise I’ve ever heard. It was stronger than 10 jumbo jets. It was the release of six decades of fear. “

A decade later, the launching pad of the Egyptian revolution – a major part of the uprisings that became known as the Arab Spring – is a very different place, as is the country. The strip of grass is concreted and on it stands a newly erected obelisk, pointing to the sky in a trench reminder of times of constant security. Traffic flows smoothly around a roundabout where there are no more protesters or attempts at disobedience. The secret police are located, not so secretly, nearby. There is little talk of a revolution, and attempts to stir up the ghosts in Tahrir Square are met with the heavy hand of the invigorated military state that has established itself since the revolution.

For Moaz Abdulkarim, it had begun quite differently. On January 25, 2011, he and a group of young Egyptians gathered in apartments on the other side of the Nile and headed to a pastry shop, where they prepared to change history.

The site was out of reach of police trucks and out of the network for security chiefs who scanned the city for sabotage fueled by the Tunisian uprising that forced dictator Zin al-Abidine Ben Ali into exile weeks earlier.

The narrow lanes of the neighborhood gave them time to organize and gather numbers before the police invaded them. And they have bypassed their persecutors in another, more important way: by mobilizing supporters on social media platforms whose exclusive reach will soon shatter the illusion that President Hosni Mubarak’s forces are too powerful to confront them.

Early this morning, the group gathered for El Hayiss cakes and launched their plan. “The meeting at the bakery was just one step in the plan,” said Abdulkarim, who now lives in exile in Europe. “There were many different groups [to co-ordinate with] and the mission of our group was to stay in the bakery in Mustafa Mahmoud Square. We watched the police to see if they would attack the protesters.

“We thought if we could succeed, then we would have a better Egypt, and if we failed, we would die or spend our whole lives in prison. During his lifetime, only Mubarak was president, so I always had a dream of seeing another president from another family.

At the time, calls on social media for crowds to gather in areas of Cairo and get closer in public spaces had created an unstoppable momentum. “Social media was the most important tool in the revolution,” Abdelkarim said. “People could communicate very easily and express themselves without any censorship.” Mubarak’s police state was run by dissenters with smartphones and Facebook accounts.

By January 28, Tahrir – or Liberation Square – had become the crucible of relentless demands for a new Egypt. And within two weeks, she had planted the seeds for Mubarak’s death. Then-US President Barack Obama withdrew Washington’s continued support for the 30-year-old Egyptian leader and backed Egyptian revolutionaries. “The Egyptians have made it clear that nothing less than true democracy will come of the day,” Obama said.

Then came a challenge to the Egyptian military, which had sided with the revolutionaries as their demands grew stronger. “The military has served patriotically and responsibly as a guardian of the state,” Obama said. “And now he will have to ensure a transition that is credible in the eyes of the Egyptian people.”

“He didn’t know it at the time, but his words were an epitaph,” said Salva Jamal, a supporter of the uprising who was forced to leave Egypt in 2014. “From then on, the military planned to take power.” ”

Nancy Okayil, an Egyptian activist and scholar, said the day of Mubarak’s resignation, February 11, revealed that the coming months should be anything but a smooth transition to democracy. “It was the worst moment for me,” she said. “I saw the tanks and I knew the military was taking power. I saw people donating military flowers, cleaning the streets and erasing graffiti. This was the beginning of the erasure of the traces of the revolution.

“People said ‘no’ all the time, no, the military is not on our side. But we knew them and we knew how they managed things. “

In 2012, democratic polls were held and Egypt’s first democratically elected president, Mohamed Morsi, a member of the powerful Muslim Brotherhood Islamist group, took office. He soon made declarations to give himself more power, and dissatisfaction with his government grew rapidly.

Less than a year later, Morsi was ousted in a coup led by then-Defense Minister General Abdul Fatah al-Sisi, which dissolved parliament and banned the Muslim Brotherhood. Repression against the disagreement began, which continues today, and Sisi was elected president in two elections.

Since then, Egypt’s new leader has sought to wipe out all remnants of the revolution, using massive repression to crush calls for change. Egypt’s civil society has been destroyed, and its artists, intellectuals, journalists and academics have been largely forced to remain silent or exiled – or imprisoned. Political opposition has also been suppressed or exaggerated, and international condemnation has long been silenced. In early December, French President Emmanuel Macron presented Sisi with the Legion of Honor, France’s highest civilian honor, with a human rights omission that global NGOs described as devilish.

Sisi’s claims to help stop migration to Europe and be a bulwark against security threats have won tacit support, and its routine suppression of dissent and expression has led to minimal consequences and impunity. Human Rights Watch said there were 60,000 political prisoners in Egypt in 2019.

Despite the repression, Khaled Mansour, a former executive director of the Egyptian Institute for Personal Rights, said many who supported the revolution would do so again. “It was still a turning point,” he said. “But we don’t always focus on comfort or the right direction.”

He added: “The only thing they have that allows them to stay in power is strength. Social cohesion, as an economic savior, terrorism, threats to national security; they all give these agencies the opportunity to say ‘we are the last redoubt’ and to postpone any talks of change.

“What we need is not a united Egypt, but a place where different factions can talk to each other and engage in political dialogue without existential fears of undoing things. Can we heal? It will take a long time of self-criticism and introspection, and that is extremely difficult to do now. “