The paleo-artist breathes new life into the ancient fossils 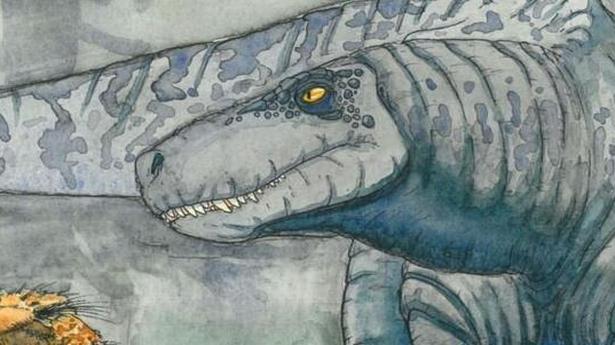 It measures up to 10 meters from the muzzle to the tail, has four protruding legs and – most notably of all – boasts a jaw lined with scary, jagged teeth.

Even in pastel colors, this image of Rausichan – the precursor to today's crocodiles that roamed the world more than 200 million years ago during the Triassic – causes trembling on the spine.

Yet, the drawing of dinosaur terrorism is not part of a teenage science-fiction magazine, but an illustration that accompanies a deeply serious scientific study published by the University of Witwatersran in South Africa.

This is the work of Victor Radermacher, a South African who is half-scientist and half-artist.

He is a "paleo artist" ̵

1; his job is to give the world an idea of ​​what these long-extinct species looked like, but rooted in the scientific control of their fossilized remains. [19659002] "The paleo-art is … we're trying to reconstruct what these animals look like and trying to breathe a little life into these old stone bones," says Mr. Radermacher.

"Whenever I am," I do these works of art. I try to inject some realism, but still inject some drama and some exciting composition that shows that these animals behave naturally, but it also shows scientific relevance. He added: "For me, paleo art is really the closest thing to traveling in time. "

John Choynier, professor of paleontology at the university, said that researchers had submitted a 30-page study to describe their findings of the highly preserved rauisauzius fossil discovered in Rosandal, Central South Africa, in 2015.

" The artwork that Victor does sums up those 30 pages into about a quarter of a page that is worth the space, "he says.