The Roomba lawnmower is finally happening 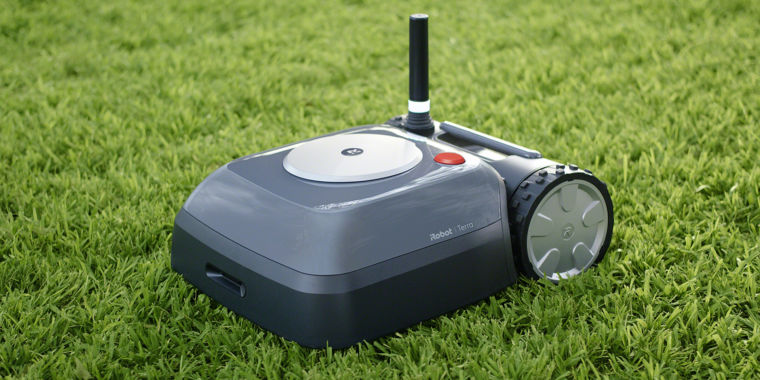 iRobot is the biggest name in home robotics thanks to its Roomba line, and a robotic army of indoor cleaning bots that will suck the dust and dirt on your floors. But what about that other giant flat surface you own that constantly needs maintenance? For that, the Roomba lawnmower is finally here: the iRobot Terra

A Roomba lawnmower has been rumored for years. The company has robomower patents going all the way back to 2008, and as late as 2015, the company was petitioning the FCC to allow it to make its outdoor beacon navigation system legal. The original Roomba was introduced in 2002, when iRobot mostly had the home-robotics market to itself. Waiting 17 years to tackle the great outdoors means iRobot is now jumping into a crowded field of competitors, and it will have to do battle with Robomow, Husqvarna's Automower line, Honda's Miimo, and a line of mowers from Worx, among others

A lot of the Roomba basics make the trip to the outdoors. The Terra is still a battery-powered robot that wheels around your property. It has all the usual self-docking capabilities that allow it to park itself on the outdoor charger when it's low on power, and it can pick up right where it left off. It uses the same "Home" app as the Roomba, so you can relax indoors and still monitor the robot as it toils in the hot sun.

iRobot says the Terra uses the same "Imprint Smart Mapping" navigation technology as the newer indoor Roombas. This means the spiral navigation of the older Roombas is dead, and the Terra will trim the lawn in nice, straight lines. Included with the package are beacons that are part of the navigation system. iRobot's press release is light on details, but with the huge antenna on the back of the robot, I would guess you put these beacons around the yard, and the bot uses them to triangulate its location. Assuming it's same system iRobot outlined to the FCC in 2015, iRobot expects "a typical residential lawn will require the placement of four to nine stakes in the ground." (19659020) When it comes to physical barriers, Terra will happily bump into a fence or the side of your house, turn, and keep going, just like the indoor bots. To keep the robot out of the flower bed or other undesirable locations with no physical barrier, you can mark off-limits zones in the app. There is no price yet, but Terra's competition ranges from $ 1,000 to $ 3,000

iRobot says the Terra will be launching first in Germany, with a US beta test happening sometime in 2019.
Source link