The teenager almost died after suffering from COVID-19-related syndrome 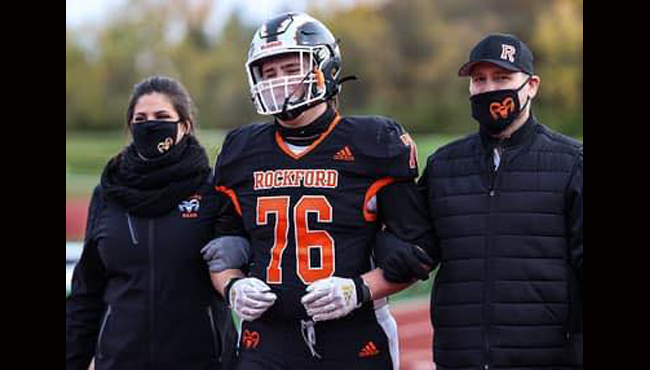 ROCKFORD, Michigan (WOOD) – While older people are more at risk of contracting COVID-19, multisystem inflammatory syndrome is a complication of the virus that can be dangerous, even deadly, to children.

McBowman, a teenager from Rockford, recently returned home from a five-day stay at Helen DeVos Children’s Hospital, where he is being treated for the syndrome. He developed the inflammatory condition approximately one month after the positive COVID-19 test.

Viral secretion: What is it and when are people with COVID-19 most contagious?

The condition is a rare inflammatory syndrome that affects children, usually after they have recovered from a COVID-1

“My sense of taste and smell was the only thing I influenced when I had COVID,” Mack said.

A few weeks and a negative coronavirus test later, Mack felt better than ever. The 17-year-old even returned to the football field, helping his rams beat another school, Hudsonville, on Friday night in early November.

A week later, Mack’s parents took him to the hospital for flu-like symptoms, but it turned out to be a continuation of his battle with the coronavirus.

“We thought it really wasn’t that bad, and we’re lucky he didn’t get sick – and then it slipped so fast,” said McJ. Bowman’s father.

It is known that the rare inflammatory condition comes weeks after the child recovers from COVID-19, which is why Mack’s rapidly deteriorating condition surprised his parents.

Doctors at Helen DeVos Children’s Hospital diagnosed him with the syndrome, but even after the initial rounds of treatment, Mack’s health continued to deteriorate.

Ohio expects a batch of vaccine against COVID-19 around Dec. 15

“During this time, even though I was in a lot of pain and felt like I was freezing and burning at the same time, and I couldn’t breathe, I just kept pushing,” Mack said.

“He was such a purposeful fighter that when he was told that his kidneys needed more water, he started writing one, two and three glasses of water and just went through seven glasses a day as a fighter,” JJ said.

Five days after his admission, Mack was discharged from the hospital and returned home, where he continued to undergo strict monitoring and treatment to help heal his heart, kidneys and other affected organs.

As a survivor, Mack and his family can’t help but think of the children who are still left to fight.

“At night, when I was just trying to relax, I sometimes heard other children in their rooms crying, which made me very sad, really, very sad,” Mack said.

Helen Devos Children’s Hospital says 10 patients with the syndrome have been treated so far – one child died after being in the hospital at the same time as Mack.

“I felt kind of guilty because I felt like I survived and she didn’t. It really saddens me … It’s hard to talk about it, “Mack said.

In addition to helping Mack recover fully, the Bowman family seeks to educate others about the potentially deadly effects of children who become infected with the virus.

“I’m just really praying for other people to see what we’re saying, because that’s all we want people to see,” Angela Baumann said. “Listen to us. We have experienced terror and we are still experiencing it, we are getting out of it and it is getting better, but this is simply not a chance, however minimal, that you would like to take it. “

Rockford athletic director Cole Andrews said they have implemented a new return-to-game protocol with their coaches that will test all student athletes with a history of COVID-19 for signs of condition.

Andrews said there had already been talk of introducing the protocol before Mack’s diagnosis, but saw his experience as an even bigger reason to do such testing.

How “vaccine nationalism” could prolong the Covid-19 pandemic

Tennessee reviews phases of vaccine, officials do not know when supply will increase – WCYB