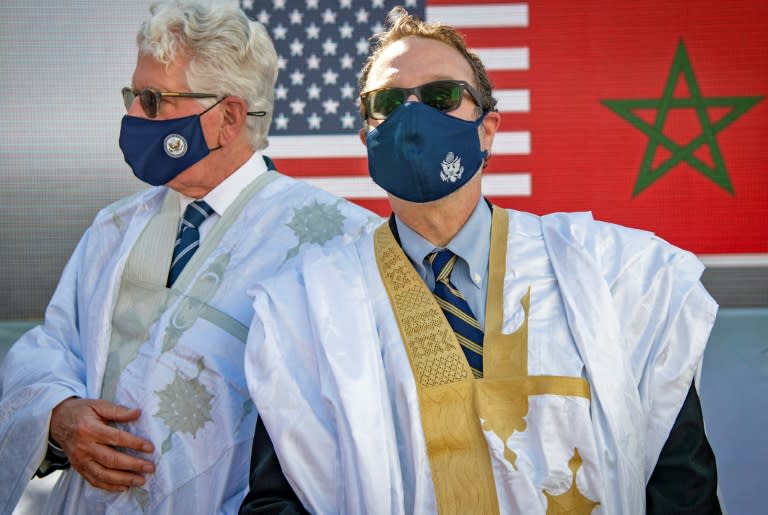 The United States on Sunday began the “process of establishing” a consulate in the disputed Western Sahara after Washington recognized Morocco’s sovereignty in exchange for Rabat, which normalizes ties with Israel.

US Ambassador David Fischer visited the port of Dakhla, 1,440 kilometers (895 miles) southwest of Rabat in the far south of Morocco-controlled Western Sahara, to mark the start of work on a diplomatic office.

“I am honored to visit this stunningly beautiful and critical region of Morocco and begin the process of establishing a US diplomatic presence here,” Fischer said, according to the US embassy.

Western Sahara is a contested and divided former Spanish colony, mostly under the control of Morocco, where tensions with the Polisario independent front have been raging since the 1

In return, US President Donald Trump has met a decade-long Moroccan goal by backing disputed sovereignty over a barren but phosphate-rich region adjacent to key Atlantic fishing grounds.

Foreign Minister Nasser Burita said on Sunday that “Morocco feels stronger in its legitimate battle for its territorial integrity … with the support of its friends.”

The Algerian-backed Polisario Front fought a war of independence from 1975 to 1991 and controlled about one-fifth of the desert.

Bachir Mustafa Sayed, a spokesman for the Arab Democratic Republic of the Sahara at Polisario, called the US delegation’s visit a “propaganda tourist trip” and recalled that “the Trump administration will end in less than two weeks” in an interview with the Algerian news agency APS.

UN peacekeepers in Western Sahara are mandated to hold a referendum on self-determination for the region, and despite Washington’s move, the UN insists its position is “unchanged.”

In November, Polisario said it considered the 1991 ceasefire null and void after Morocco sent troops to the UN-patrolled buffer zone to open a key road.

Burita said on Sunday that Morocco continued to “support a ceasefire, but will respond to any provocation”, adding that Rabat “would support the UN process … to find a solution to this long-running dispute”.

Fischer, who called Sunday’s visit “another historic milestone in more than 200 years of friendship” between Morocco and the United States, was accompanied by Assistant Secretary of State for Middle East Affairs David Schenker.

The couple wore flowing white embroidered clothes, which are traditionally worn on the territory on their suits.

In December, the US State Department opened a “virtual” diplomatic post in Western Sahara before finding a “suitable place” to build a consulate.

The building is expected to be ready in the coming months, Fisher added.

Last month, Fischer said the consulate would allow Washington to “take further advantage of Morocco’s strategic position as a trading hub in Africa, Europe and the Middle East.”

The Moroccan-Israeli deal to normalize ties is expected to involve significant investment from the US International Development Finance Corporation, and Morocco hopes Dakhla will become a major regional port.

Last month, the DFC signed a memorandum of understanding to invest $ 3 billion over the next four years in Morocco or with Moroccan partners working in sub-Saharan Africa.

He also promised an initiative to “catalyze $ 1 billion in investment in projects that promote women’s economic empowerment in the Middle East and North Africa.”

US President-elect Joe Biden, who will replace Trump on January 20, has not publicly commented on Western Sahara.

Sacramento deputy Adam Gibson had rescued a man from the bridge in 2018.