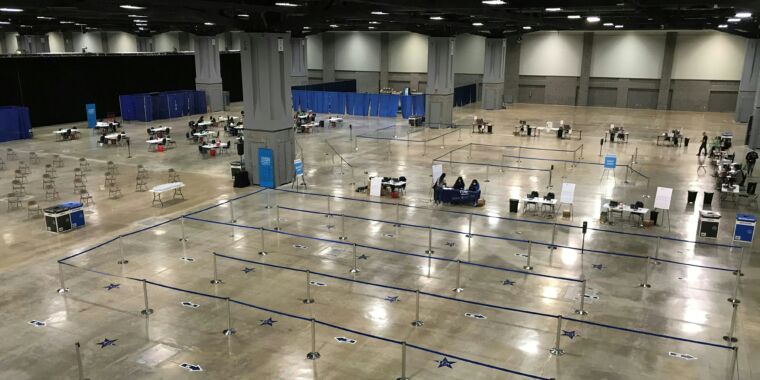 The rate of vaccination against COVID-1

9 in the United States has now slowed to a creep after weeks of decline in the number of doses given each day. The continuing trend threatens to further spread the devastating pandemic. At present, this violates the goal set last month by President Joe Biden to vaccinate 70 percent of American adults with at least one dose by July 4.

On Monday, the seven-day average daily dose in the country was again below 1 million, where it has been for several days. The average has not been so low since January 22. In mid-April, the average reached nearly 3.4 million doses per day, after a record of more than 4.6 million doses administered in one day.

With less than a month to go until Independence Day, there is a real chance the United States will be ashamed of Biden’s 70 percent target. Currently, about 63.7% of adults in the country have received at least one dose. But some of the daily doses now go to teenagers between the ages of 12 and 17, who became eligible for vaccination last month. And the total number of vaccinations is still significantly reduced. If current trends continue, the United States may have only about 67% of adults vaccinated with at least one dose by July 4, according to an analysis conducted by USA Today.

This vaccination rate, of course, will not be the same across the country. Some states and districts lag far behind in vaccinating their populations, while others are close to or have already achieved Biden’s goal. Thirteen countries, most of them on the coast, have already vaccinated 70 percent or more of their adult populations with at least one dose.

But in general, the large vaccination centers that remain open are largely empty, and the once-desired doses of COVID-19 vaccines collect dust. For example, nearly half of the 21 million doses of Johnson and Johnson vaccine produced in the United States are now unused, according to an Associated Press report. The report also suggests that at least some of these doses may expire before ever reaching the shoulder; most doses are sent in early April, and the vaccine has only a three-month shelf life.

The Biden administration, along with state and local officials, have anticipated and adapted to try to combat the problem. From April, it became clear that the country would quickly be reluctant to be vaccinated, leaving the hesitant and resilient to remain. As such, staff have closed many mass vaccination sites and turned to smaller sites, mobile units and local pharmacies to reach vaccination sites.

“As the numbers dwindled, we were spinning,” Fernando Urego, a temporary health worker in Hamilton County, Tennessee, told The Washington Post. “We now know that we will not be able to give 1,000 vaccines in one day in these pockets. If we get 10, we are in ecstasy. If we get 15, it’s a good day. There is still a lot of effort for low yields, but we are fine with that. “

But while each vaccination will help the United States emerge from the pandemic and return to normalcy, it is not yet clear how far the new targeted vaccination efforts will go. For now, the people who are most resistant to vaccination seem unshakable in their resistance. A survey of COVID-19 vaccination surveys conducted by the Kaiser Family Foundation last December consistently reported that between 13 and 15 percent of adults in the United States said they would “definitely not be vaccinated.”

The proportion of people who said they wanted to “wait and see” before deciding to get vaccinated shrank in the poll, moving from 39 percent in December to 12 percent in May. But recent efforts to stimulate vaccinations have largely failed to address them. These efforts include offering monetary incentives, free travel to vaccination sites and relaxed restrictions on wearing masks and physical distancing. The most effective motivators, according to the survey, appear to be the full approval of the COVID-19 vaccine by the Food and Drug Administration (rather than this Emergency Authorization) and the payment of leave by employers for vaccination. But even these did not affect the majority of detentions.