These Animal Migrations Are Huge – And Invisible 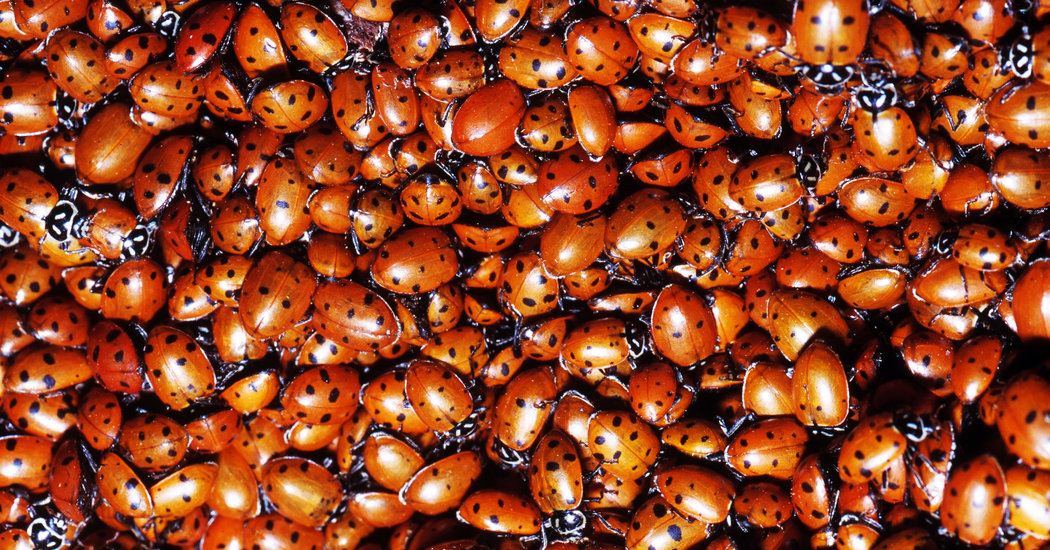 Meteorologists at the National Weather Service were looking over radar images in California on the night of June 4 when they spotted what looked like a wide swath of rain. But there were no clouds.

The meteorologists contacted an amateur weather-spotter directly under the mysterious disturbance. He was not getting soaked by the rain. Instead, he saw ladybugs. Everywhere

The radar apparently had picked up and a cloud of migrating ladybugs spread across 80 miles, with a dense core ten miles wide floating 5,000 feet to 9,000 feet in the air. As a giant as the swarm was, the meteorologists lost track of it. The ladybugs disappeared into the night

In comparison to other animal migrations, migrations of insects are a scientific mystery. It's easy to spot and a herd of wildebeest making its way across the savanna. Insects, even in huge numbers, move from place to place without much notice. "The migrations themselves are totally invisible," said Jason Chapman, an ecologist at the University of Exeter in Britain

Dr. Chapman and his colleagues are using radar to bring insect migrations to light. The scientists help run a unique network of small radar stations in southern England designed to scan the sky 24 hours a day, spotting insects flying overhead

"These radars are fantastic," said Dr. Chapman. "We have a lot of information about each individual insect that flies overhead, including a measure of the shape and measure of their size."

Chapman and his colleagues decided to scan their images for one type of insect in particular, known as hoverflies.

You've probably seen a hoverfly, but you may have thought you were looking at a wasp or a bee. Hoverflies are harmless, but they have evolved to mimic stinging insects as a way to scare away predators.

Hoverflies provide two great ecological benefits. As larvae, they defend gardens and farms by eating aphids. As adults, they pollinate flowers as they eat nectar and polen.

"I do not think you could create a more useful insect," said Dr. Chapman.

Scientists had the clue that some species of hoverflies migrated, but they knew little about the timing or scale of their movements.

To tally the hoverflies migrating through southern England, Dr. Chapman and his colleagues brought one species, the marmalade hoverfly, into the lab and bounced radar off it. They determined the distinctive radar signature of the insect, and then searched for it in scans made by their network of instruments.

The results, published in the journal Current Biology, revealed hordes of insect zipping overhead. The scientists estimate that up to 4 billion hoverflies migrate in and out of southern England each year.

But the true number is probably higher, because the radar system can only spot insects flying over 450 feet. (By comparison, there are estimated 5 billion honeybees in managed hives in all of Britain.)

Each fly may travel 50 or 100 miles a day, and over the course of a year's migration, hoverflies may go through several generations. This mass migration has a huge influence on the environment. Dr. Chapman and his colleagues estimate that the larvae produced by the migrating hoverflies each year in southern England devour an average of 6 trillion aphids – which together weigh about 7,000 tonnes

The flies visit billions of flowers each year. And as the insects travel along their migration route, they carry pollen over long distances. The researchers estimate that hoverflies import 3 billion to 8 billion pollen grains into southern England in the spring, and then take 3 billion to 19 billion grains of pollen with them as they fly south in the fall

The insects are important not just for the prey they eat and the pollen they carry. They themselves are tiny packages of nutrients. Many are eaten by predators; the others fertilize the soil after they die. They include about 80 tonnes of biomass, packed with 35 million calories, the researchers estimate.

"I think people will be amazed by the scale of migrations and the importance of ecosystem services," said Dr. Chapman

Other insect species, such as ladybugs, may be similarly mammoth migrations in other parts of the world. But there are very few researchers using radar to track them. In Australia, scientists are scanning for locusts, and Dr. Chapman is currently in China helping researchers set up a new insect-tracking network.

Understanding these migrations is all the more important. Chapman said, because many non-migrating insect populations are on the decline. By contrast, hoverfly migrations have remained stable for the past decade.

"These migratory hoverflies, in our part of the world at least, are doing pretty well, because they are less vulnerable because they are not stuck in one place, vulnerable to pollution or climate change. "He said. "And so they may be playing an increasingly important role as we go into the future."