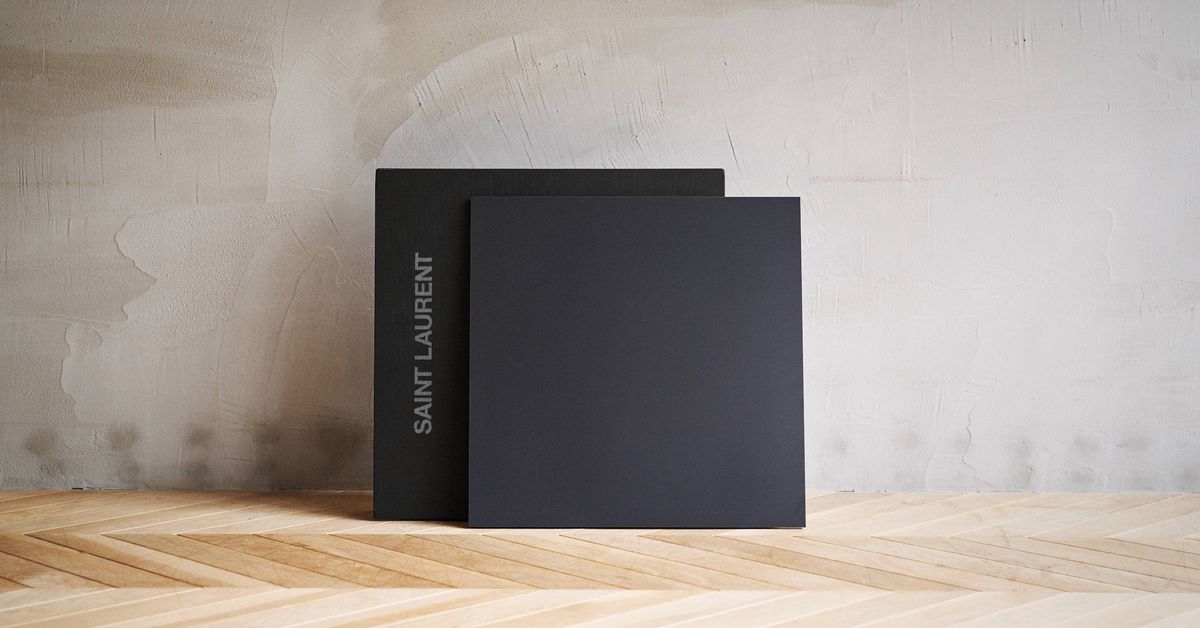 Japanese company COTODAMA has teamed up with the luxury brand of Saint Laurent for a limited edition, an all-black version of its Lyric Speaker Canvas that is available to buy in the fashion house's Rive Droite stores. COTODAMA's Lyric Speaker Canvas was first released last year and the original has a silver and black design. The silver backboard is the actual speaker, while the black front board is the screen that displays song lyrics. It's one unit, but it looks like two pieces, and it's meant to evoke the idea of ​​vinyl record jackets leaned up against your wall. The size is a bit bigger than an actual record sleeve, but not by much. The Lyric Speaker Canvas is 1

When it plays music, the front panel links with databases like PetitLyrics to grab a song's lyrics. It then displays the lyrics in time with the song, and analyzes the song's mood to pick fonts and animations. Blocked text that bursts on the screen might be paired with a bold pop song, and a drifting, handwritten script would go with a slow ballad. If no lyrics can be found, the screen will show abstract animations that move in sync with the music instead. There is a nifty interactive demonstration on the COTODAMA website that lets you see how it visualizes lyrics for different types of songs.

The speaker connects via Wi-Fi with Airplay, Google Cast, and Spotify Connect on the iOS side, and Google Cast , and Spotify Connect if you have Android. If you're using Android, Amazon Music, Google Play Music, Spotify, and YouTube Music are compatible, and iOS version also supports Apple Music and a few other regional services such as KK BOX

This is a limited edition black edition on black lyric speaker that looks like vinyl records and shut up and take my money ] This edition of the speaker has the same specs as the original but comes with an all-black colorway and the Saint Laurent logo on the back panel. Slathering products completely in black instantly make them look more sleek, and this collaboration is no different. When Leica made an all-black Monochrome camera, the result was gorgeous. The all-black OnePlus 3T was equally slick. It's similar to another recent Saint Laurent collaboration, which took Bang & Olufsen Beoplay A9 and A1 speakers and drenched them in black

If you want to grab this rare speaker, it costs a few hundred dollars more than the original version, but in return you get the all-black aesthetic and Saint Laurent logo. (19647009) and is available only at Saint Laurent Rive Droite stores in Los Angeles and Paris.
Source link