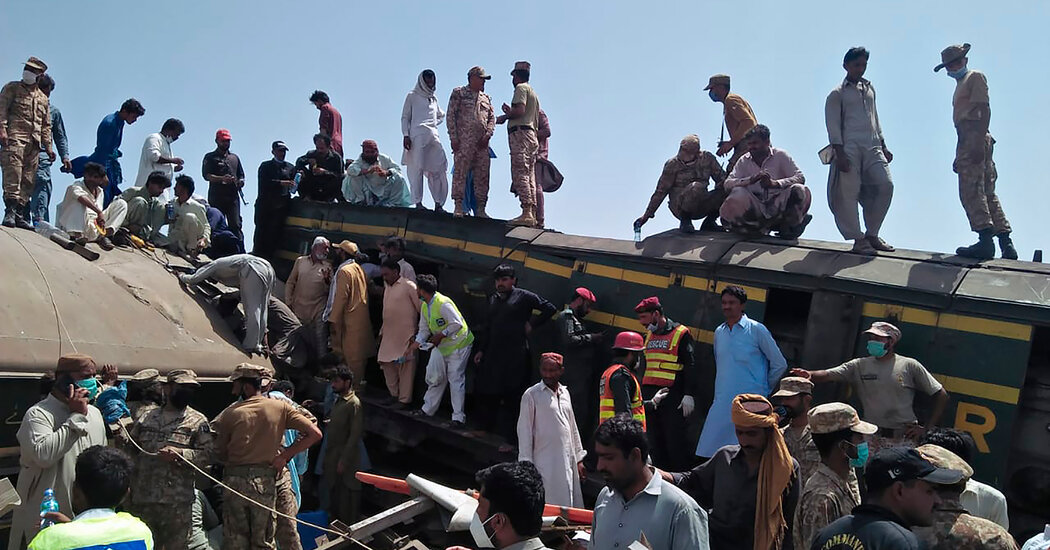 ISLAMABAD, Pakistan – Two express trains collided in southern Pakistan on Monday morning, killing at least 32 passengers and injuring 80 others, authorities said, the latest in a series of train crashes that have raised serious safety concerns. railway transport in the country.

Most of the passengers were asleep when the Millat Express, a passenger train traveling from the southern port city of Karachi to Sargoda in Punjab province, derailed and fell off the rails. Within minutes, another Sir Syed Express passenger train, traveling to Karachi from Lahore in eastern Pakistan, crashed into the wrecked carriages of the first train, leaving a wrecked wreck, local news agencies reported.

The clash took place between Daharki and Raiti railway stations in the southern province of Sindh, said Nazia Jabin, a spokesman for Pakistan’s railways.

A rescue operation is underway, Ms Jabeen said. Several of the injured were taken to hospitals in the Rohri, Pannu Aqil and Sukkur neighborhoods, she said, adding that the death toll was likely to rise.

Prime Minister Imran Khan said on Twitter that he was “shocked by the horrific train crash” and ordered a “comprehensive investigation into railway safety faults”.

Azam Khan Suati, Pakistan’s railway minister, said a high-level investigation had been ordered to investigate the cause of the collision. “It is too early to say whether the incident was due to sabotage or the dilapidated condition of the railway,” Mr Suati said.

Pakistan has seamless experience in train safety and the system is plagued by corruption and mismanagement. The promises of the next governments for a major overhaul of the system remain unfulfilled. Mr Hahn, who came to power in 2018, has promised to modernize the system’s poorly maintained signaling system and aging tracks and ensure its safety mechanisms.

But power catastrophes are also common in Mr Hahn’s government. More than 70 people were killed in a train fire in 2019 in one of the worst train accidents in years.

In 2005, three trains crashed in a deadly chain reaction after a driver misread a signal, killing at least 127 people and injuring hundreds more in southern Pakistan. At least 210 people were killed and 700 others injured in 1990 when a 500-mile-night train south of Multan to Karachi hit an empty freight train. Officials blamed an incorrectly set switch.