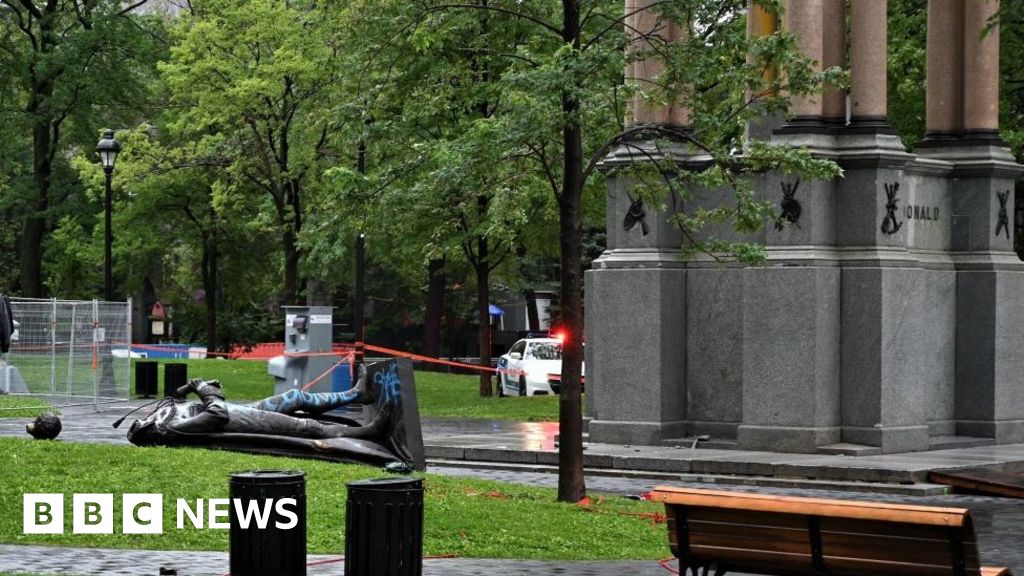 Canadian Prime Minister Justin Trudeau says he is “deeply disappointed” with the removal of the statue of Canada’s first prime minister over the weekend.

He called the act “vandalism.”

Activists in Montreal removed a statue of Sir John A. MacDonald, who was linked to politicians who killed many locals in the late 19th century.

He videotaped the moment when the head of the statue flew away and bounced to the nearby pavement.

On Monday, Mr Trudeau said that while he understood the “impatience and frustration” of Canadians who had dealt with discrimination, actions such as the removal of the statue “would not move us forward as a society”.

He said communities and cities should choose how to remember conflicting historical figures, not a small group acting unilaterally.

The Prime Minister of Quebec and the Mayor of Montreal also condemned the action of the activists.

Mayor Valerie Plante said it “cannot be accepted or tolerated”, adding that it was better to put historical figures “in context rather than remove them”.

Quebec Prime Minister Francois Lego wrote on Twitter, “whatever Sir John A. MacDonald thinks, destroying a monument in this way is unacceptable.”

“We have to fight racism, but destroying parts of our history is not the solution. Vandalism has no place in our democracy and the statue must be restored.”

The statue has been a frequent target of activists over the years and has often been sprayed with paint.

Macdonald was Prime Minister of Canada between 1860 and 1890 and is remembered for his nation-building policies.

But he also created a system of residential schools that forcibly removed at least 150,000 indigenous children from their homes and sent them to state-funded boarding schools.

Many children were abused, and some died and were forbidden to speak their own language or practice their culture. A government report in 2015 called the practice a “cultural genocide.”

He has been accused of allowing famine and disease to kill many indigenous peoples, and his government has forced some First Nation communities to leave their traditional territories, withholding food until they do.

Mr Trudeau said at a press conference in Montreal that it was fair to “ask questions about all our former prime ministers, all our former leaders who have done very good things but also made mistakes”.

“Sir John A. MacDonald has done very good things, but we need to be far more critical of some of his actions,” he added.

A number of statues of controversial historical leaders around the world have been removed in recent months during heated public debates about how societies should remember leaders linked to slavery, empire and racism.

Belgian protesters also distorted statues of King Leopold II because of the deadly legacy of his personal colony in what is now the Democratic Republic of Congo.