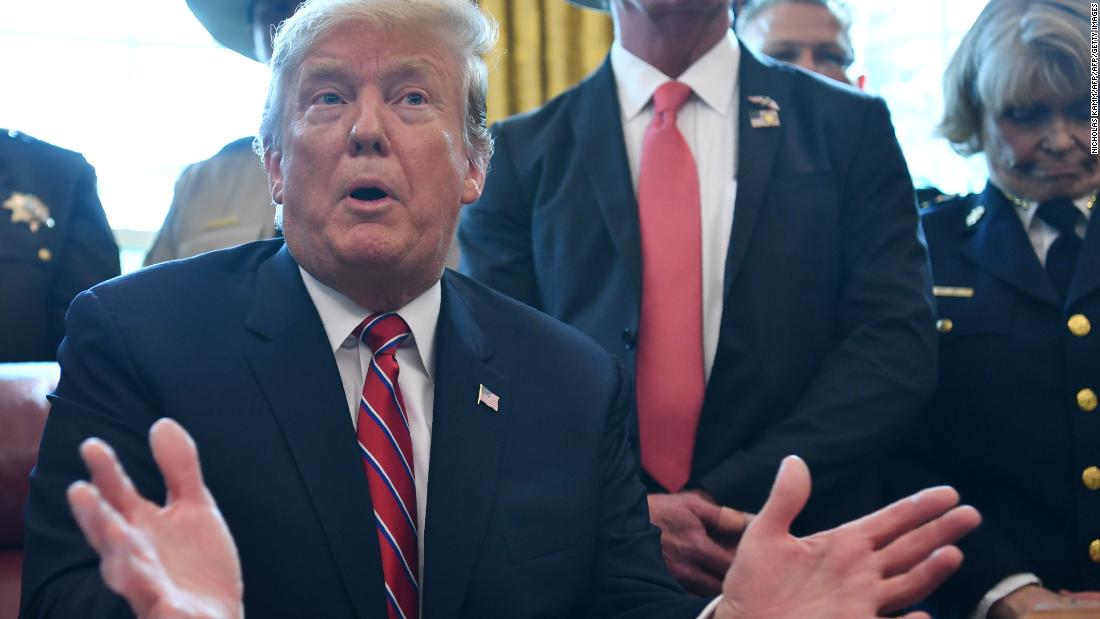 His response to the carnage in New Zealand, where 49 people died in an attack on two mosques, is also raising fresh questions about his attitude towards Islam following a long history of anti-Muslim rhetoric – and about the extent to which

On Twitter and in remarks in the Oval Office, Trump was clear in condemning the killings. "I spoke with Prime Minister Ardern of New Zealand to express the sorrow of our entire nation following […]

" I spoke with Prime Minister Ardern of New Zealand to express the sorrow of our entire nation following the monstrous terror attacks at two mosques, "the Trump said in the Oval Office on Friday afternoon after first condemning the attack as a" horrible massacre in the Mosques "on Twitter.

" These sacred places of worship were turned into scenes of evil killing, "the president said. "It's a horrible, horrible thing."

But when asked if he saw a worrying rise in white supremacy around the world, Trump said he did not blaming a small group of people " with very, very serious problems. " He also told reporters that he had not seen the manifesto linked to a social media account, which was believed to belong to one of the attackers, who mentioned Trump by name and saw him as a symbol of renewed white identity

" We join the New Zealand and Muslim communities around the world in condemning this evil as we pray for the families of each victim and grieve together, "Ivanka Trump tweeted on Friday morning.

White House spokeswoman Sarah Sanders called the Christchurch killings a" vicious attack of hate, "though she did not specifically mention that the attack was against Muslims

Trump's failure to do more to point out that the worshipers who died in Christchurch were Muslim represents a double standard, given that he has been much clearer in asscribi

Last year, after an attack on a Jewish temple in Pittsburgh, Trump spoke of an "anti-Semitic" motive in the attack, which itself sparked a debate over his inflammatory rhetoric
When 28 Coptic Christians died in suicide bombings in Egypt in May 2017, the President decried the "merciless slaughter of Christians" and warned that "bloodletting of Christians must end."
As a candidate, Trump called for a "total and complete shutdown of Muslims" entering the United States, and as President he eventually succeeded in using executive power to ban travel to US by citizens of seven nations, five of them mainly Muslim

Trump has often been quick to wade in when a Muslim extremist has been a perpetrator of an attack and Muslims are not the victims,

"Incompetent Hillary, despite the horrib le attack in Brussels today, wants the borders to be weak and open-and let the Muslims flow in. No way! " Trump, for example, tweeted in March 2016.

" They are being run for office, he excoriated Democrats as dishonest about the motivation of Muslim extremists who carried terror attacks. radical Islamic terrorists, and she will not even mention the word, and nor will President Obama, "Trump said at a presidential debate, referring to Hillary Clinton." Now, to solve a problem, you have to be able to state what

Trump has often been accused of using a rhetoric that emboldens extremists and dehumanizes his targets. He has used vulgar language to criticizing NFL stars who took a knee during the National Anthem.In announcing his campaign, he said Mexico was sending "rapists" across the border to the US. warned of "invasions" of undocumented migrants

The question of whether President's rhetoric has emboldened white supremacists erupted into a multi-day controversy in 2017, when he said there were some "very fine people on both sides" after white nationalist marchers were met by counterprotections in Charlottesville, Virginia.
Trump's moral leadership also came into question when he initially equivocated after he was endorsed by white supremacist

The President's comment Friday that white nationalism is not a growing problem in contrast to the vehemence with which other world leaders have responded, and their clear condemnations of white supremacist rhetoric and ideology. Theresa May said there was no place in society for "the vile ideology that drives and incites hate and fear."

In a tweet that posted before the Trump's comments in the Oval Office, Democratic Former Vice President Joe Biden – a possible White House candidate in 2020 – appeared to have Trump on his mind

"Whether it is anti-Semitism in Pittsburgh, racism in Charlottesville, or xenophobia and Islamophobia today in Christchurch, violent hate is on the march at home and abroad. "Biden tweeted

" Silence is a complicity, "he added." Our children are listening.

Democratic Rep. Joaquin Castro of Texas condemned Trump for what he styled as an extremist rhetoric

"There is a cost to that. And the cost is part of what we saw today. There are people out there who are unstable that will be inspired by that and take action, "Castro told Wolf Blitzer on" The Situation Room. "

White House Director of Strategic Communications Mercedes Schlapp told reporters Friday that it was" outrageous to even making that connection between this deranged individual who committed this evil crime to the President, who has repeatedly condemned the bigotry, racism. "

Trump's dismissal of the idea that white nationalism is on the rise contradicted his own government warnings, and it

In a May 2017 intelligence bulletin obtained by Foreign Policy magazine, the FBI and the Department of Homeland Security warned of "lethal violence" from a white supremacist extremist groups

Trump's view also does not take into account the rise of white nationalist groups in politics in Europe, which has seen large marches in some cities.

According to the Anti-Defamation League, 71% of the deaths linked to extremism in the United States between 2008 and 2017 were committed by far-right attackers