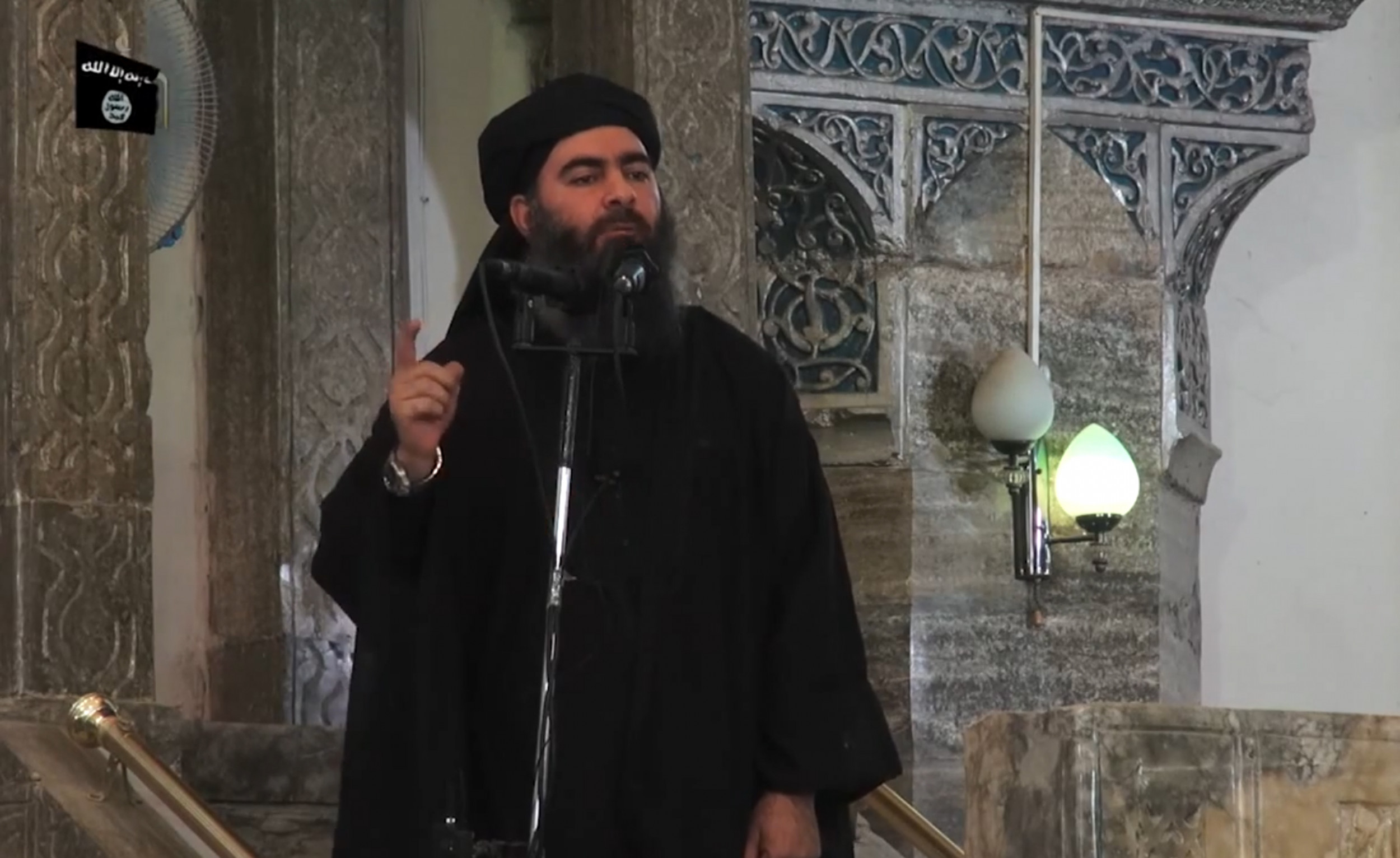 US military has attacked special operations aimed at one of its most valuable targets, Abu Bakr al-Baghdadi, leader of the Islamic State Battle Group (ISIS), Newsweek learn, President Donald Trump approved the mission nearly a week before it took place.

Against the background of Saturday US military helicopters over northwestern Idlib province in Syria, a senior Pentagon official familiar with the operation and an army official informed Newsweek that my Baghdad was secretly an operation in the last bastion of Islamist-dominated opposition in the country, a faction that has been facing ISIS in recent years. A U.S. Army official reported on the results of the operation, Newsweek reported that Baghdadi was killed in the attack. And the Department of Defense has told the White House that they have "high confidence" that the high-value killed is Baghdad, but further checks are underway.

Members of the Joint Special Operations Command team conduct the high-level operation on Saturday. after receiving reasonable information from sources familiar with the operation. The location of the Special Operations Troops has been under surveillance for some time.

On Saturday evening, after the operation was over, President Trump tweeted: "It just happened so big!" The White House later announced that the president would make a "keynote address" on Sunday at 9:00 AM

Baghdadi, an Iraqi citizen, is an ultra-conservative cleric who became active in the Islamist rebellion against US forces following the 2003 invasion that overthrew Iraqi President Saddam Hussein. He was held by US forces detention centers for Abu Ghraib and Camp B ucca, where a number of future jihad leaders rubbed shoulders while in military arrests.

He continued to join al-Qaeda in Iraq, rising in the ranks of the violent group as he merged with others to form an Islamic State in Iraq and eventually inherited his leadership in 2010, when his predecessor he was killed in a joint US-Iraqi operation. While the group took advantage of the US military's launch for further expansion, in 2013 it renamed the Islamic State group in Iraq and Al-Sham – or the Levant – better known as ISIS, seeking to expand to neighboring Syria, where civil war is raging.

Baghdadi forces made lightning-fast profits in both Iraq and Syria, and in 2014 he declared his group as the global caliphate of the Big Al-Nuri Mosque in the second Iraqi city of Mosul, in his only known public appearance as ISIS leader . Formerly known as the Islamic State since then, the group has begun to attract worldwide attention not only for the atrocities committed in the region, but also for the heavy strikes against civilians in the West.

The United States joined Syria in support of groups seeking to overthrow President Bashar al-Assad in an uprising, also backed by Turkey and other regional forces. The Pentagon has begun to reconfigure itself, partnering with Kurdish-led Syrian Democratic Forces as ISIS becomes more powerful, Islamists outpace opposition, and Russia joins Iran in support of Assad against these factions.

Rival campaigns led by the Syrian government and the Syrian Democratic Forces were launched to defeat ISIS, which began to spread abroad with bloody attacks in France, Germany, the United Kingdom and beyond. The perpetrators of at least three massacres in the United States profess their allegiance to ISIS.

The group has begun losing positions in both Iraq and Syria in recent years, but with a coalition led by the US, Iran and Russia among international forces seeking Baghdad . Although various, contradictory reports were presented on his fate and whereabouts, no government has recognized any knowledge.

The most persistent of these reports is that he was in the so-called Jazeera region. Once a hot area for ISIS activities, the area is often described as in poor health. The area is conquered by US-backed Syrian Democratic Forces – yet Baghdad is nowhere to be seen.

"Baghdadi, who is in Syria, follows his alleged way of life operating between Iraq and Syria", a former senior counter-terrorism officer who traces and supports the capture of operatives traveling from Pakistan to Iraq and Turkey, told about Newsweek . "If he is dead, it would be a severe blow to ISIS, especially if other senior executives were killed during this operation."

Recently, in February, Vice Admiral Igor Kostyukov, head of the Russian Intelligence General's Intelligence Directorate, told Tass that "Baghdadi's whereabouts are unknown" but "he is definitely not in Idlib". The site is the base of operations for Hayat Tahrir al-Sham, a jihad rival group linked to the former Al Qaeda Nusran Front, led by former Baghdad associate, Abu Mohammed al-Jolani, who refused to join ISIS in a move that created a major divide among militant groups.

Assad himself was seen on a rare visit to the front lines of Idlib province in footage published on Monday. The Syrian leader told his troops "that the battle of Idlib is the nucleus of a decisive end to chaos and terrorism throughout Syria" and pledges to defeat an array of rebel groups there, while also uniting with forces led by Kurdish cities against any attempts led by Turkey

With national defeats at the hands of the government and its allies, a number of Syrian rebel groups have decided to reorganize with Turkey's support. Ankara is mobilizing these fighters to fight the Kurdish People's Protective Units (YPG), a major component of the Syrian Democratic Forces, considered a terrorist organization by Turkey over alleged links with the banned Kurdistan Workers' Party (PKK).

Although Trump withdrew US special forces from northern Syria, he called on some troops to remain elsewhere in eastern Syria, where much of the country's oil reserves remain under the control of Kurdish states. A convoy of US military vehicles was seen rolling through the city of Camisli on the way to eastern Deir Ezzor.

Turkey has since ceased its invasion following back-to-back deals with the US and Russia seeking to restore Assad's authority at the country's northern border and facilitate the withdrawal of YPG This process continues, although reports of sporadic violence remain between the two factions, something that some critics of worrying about leaving the US may give ISIS a chance to rise again.

Asked how Baghdadi's death could affect the US withdrawal, the former senior counterterrorism official said Newsweek "If you are leaving, you want to try to find your goals before you leave."

Joint Special Operations Command, outside the US Army Fort Bragg in North Carolina, is a sub-unified command of the US Special Operations Command. Led by Lieutenant General Scott A. Howell, the command leads special missions, such as the Navy Special Warfare Development Group and the 1st Delta Special Forces Task Force, known to the public as SEAL Team Six and Delta Force, respectively. . [19659002] A related Newsweek response was not returned prior to publication by either the National Security Council or the Department of Defense.

James LaPorta reports on national security and the Department of Defense to Newsweek. He is a former US infantryman and a veteran of the war in Afghanistan. You can follow him on Twitter at @JimLaPorta

Tom O & Connor is a staff writer focused on foreign conflicts and politics. Prior to joining Newsweek, he previously reported on the International Business Times and the New York Post. You can follow him on Twitter at @ShaolinTom

Naveed Jamali is a Newsweek columnist and former FBI double agent. He is the author of How to Catch a Russian Spy. You can follow him on Twitter at @NaveedAJamali

The coronavirus robs the biblical Bethlehem at Christmas

The British retailer Arcadia Group, owner of Topshop, is filing for bankruptcy.