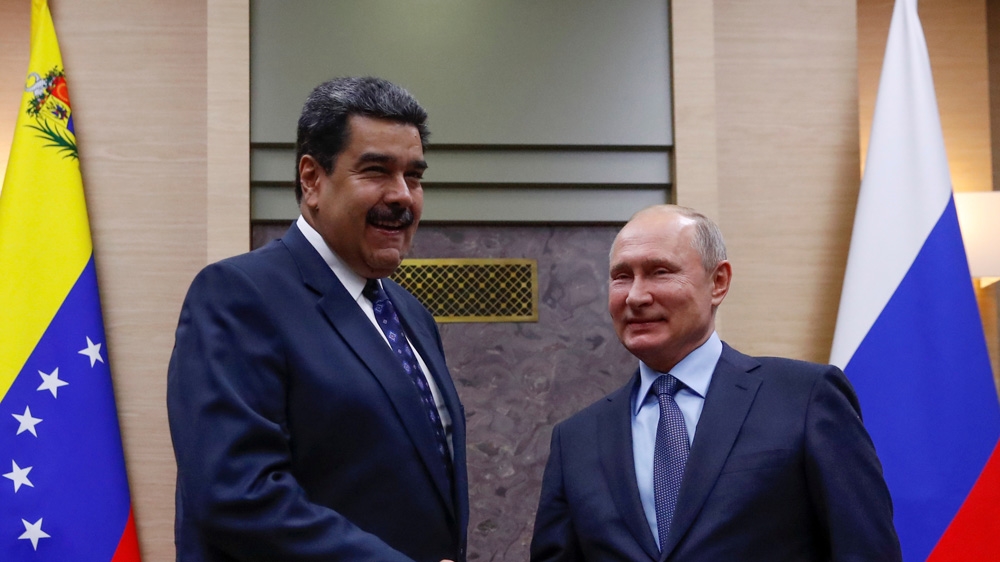 US President Donald Trump has called on Russia to pull its troops from Venezuela and warned "all options" were open to making that happen.

Russia and China have backed President Nicolas Maduro, while the United States and most Western countries have supported the opposition leader Juan Guaido. In January, Guaido invoked the constitution to declare himself interim president, arguing Maduro's 2018 re-election was illegitimate.

"Other than military, you can not get any more pressure than they have … All the options are open," he added.

Russia has bilateral relations and agreements with Venezuela, which it plans to honor, Russian Deputy UN Ambassador Dmitry Polyanskiy said in response to Trump's comments

"It is not up to US to decide actions and fate of other countries. It is only to the people of Venezuela and its only legitimate President Nicolas Maduro, "Polyanskiy said on Twitter

It is not up to US to decide actions and fate of other countries. It is only to the people of #Venezuela and its only legitimate president Nicolas #Maduro . We have bilateral relations and agreements with this country which we will honor. #HandsOffVenezuela #YankeeGoHome https://t.co/5uNMZu5EH1[19459003)
– Dmitry Polyanskiy (@Dpol_un) March 27, 2019

Maduro also said a high profile Venezuelan-Russian intergovernmental meeting will be held in April, adding that the parties plan to sign nearly 20 agreements in the spheres of economy,

'Break up our morale'

Maduro, who retains control of state functions and country's military, has said Guaido is a puppet of the United States

Trump hosted Guaido's wife, Fabiana Rosales, who is a journalist and opposition activist at the White House on Wednesday.

Rosales told Trump that Guaido was attacked on Tuesday, though she did not provide details

"I fear for my husband's life," she said. She was accompanied by the wife and sister of Roberto Marrero, Guaido's chief of staff, who was arrested and detained last week

#AHORA | Fabiana Rosales has been reunited with President Donald Trump as a member of Nicolás Maduro, who has been intimidating and intimidating her, and has been running for detentions and up allegados https://t.co/fcFbGKyUWQ ↓ pic.twitter.com/zyybrznYOj [19659021] – NTN24 (@ NTN24) March 27, 2019

Earlier at the White House, Rosales met with Vice President Mike Pence and told him power outages and food shortages were hurting children in her country. "Let me tell you that there is light, and the light is here," Rosales told Pence

She is slated to meet US First Lady Melania Trump in Palm Beach on Thursday on a quick stop in South Florida, home to the largest community of Venezuelan exiles in the United States.

Rosales is also slated to meet politicians on Capitol Hill and members of the Venezuelan diaspora at a prominent Washington think -Tank.

"Our message is very simple: We're with you," Pence said

Meanwhile, the country is experiencing its second major blackout,

Maduro said that an attack on its electrical system caused the blackout that hit first on the city of Caracas, Monday.

Intermittent service has long affected Venezuela's largely rural interior, but residents of Caracas fear the increasing blackouts in the capital mean that unreliable power is becoming the new normal for them, too

"I hope that now with these blackouts in Caracas they can do something that everyone reacts," said Maria Melendez, a seamstress in the western city of Punto Fijo who said she had to replace damaged appliances during previous blackouts

"They used to say that Caracas is Caracas, and everywhere else is weeds and serpents."