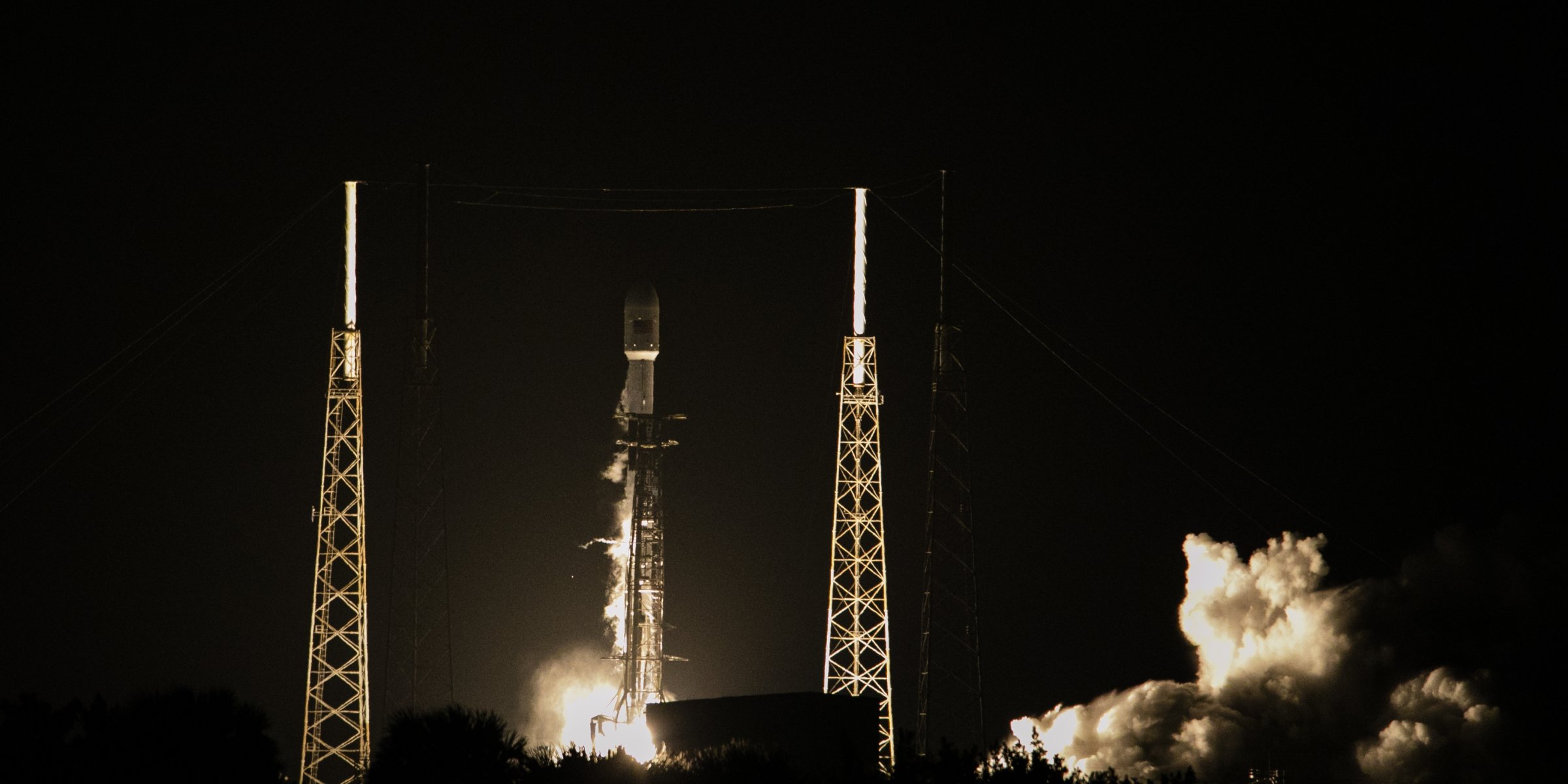 A SpaceX Falcon 9 rocket was launched from the launch site in the US state of Florida to launch a new generation of Turkish communications satellite into orbit late Thursday.

“With the Türksat 5A satellite, Turkey will secure its orbital rights for the next 30 years,” President Recep Tayyip Erdogan said on Friday.

Equipped with the latest technology and greater capacity, Türksat 5A will provide television services and improve broadband data networks. It will be located in an unused Turkish orbital slot 31

degrees to the east.

Once the newly launched satellite is launched into orbit, Turkey’s active satellites in space will increase to seven, Erdogan told a special session of Satellite Technology Week via video conference at the Vahdettin mansion.

Three of the satellites currently in space are working for communication, namely Türksat 3A, Türksat 4A and Türksat 4B, while the other three, Göktürk-1, Göktürk-2 and Rasat, are for observation.

Türksat 5A will be in orbit in four months and will start operating in the second half of 2021, according to the Turkish Ministry of Transport and Infrastructure, which also said that the country’s frequency and orbital rights are guaranteed for the next 30 years.

Erdogan said the satellite would cover Europe, the Middle East and large regions of Africa, as well as the Mediterranean, the Aegean and the Black Sea region.

“With this satellite, which has a wide range of services, we also support our existing communication satellites. “Turkey is one of the 30 countries with the right to orbit in space,” he said.

“The launch is underway,” Musk tweeted, sharing the live broadcast of the Turkish satellite launch.

Türksat 5A aired its first signal 35 minutes after the launch, Turkish Transport and Infrastructure Minister Adil Karaismailoglu said on Friday as the satellite was about to enter orbit.

“This trip will take four months. “Then we will conduct our tests and the satellite will be activated,” he said.

The satellite will start operating in the second half of 2021.

Turkey signed an agreement with the global aerospace company Airbus in 2017 for the production of the Türksat 5A and 5B orbits.

Türksat 5A was built in collaboration with Türksat, Turkish Aerospace Industries (TAI) and Airbus Defense and Space. It was delivered to Türksat employees on 2 October 2020.

Liftoff was previously planned, but the launch was postponed several times.

The satellite will provide Ku-band television broadcasting services. It will carry 42 transponders and will be located in an unused Turkish orbital slot at 31 degrees east, after all orbit and subsystem controls are performed at the stations.

The satellite is expected to start operating in the second half of 2021.

Addressing Satellite Technology Week, Karaismaigloglu said the launch was a harbinger of bigger and prouder stages.

He promised that the country would continue to increase its satellite technology, focusing on the fact that the future is in space, out of surveillance or communications satellites.

“The excitement and enthusiasm we feel is too great to fit into words. However, this step is a harbinger of bigger and prouder stages, “he said of the launch of Türksat 5A.

A local satellite that will be launched in 2022.

Erdogan went on to say that Turkey plans to launch its local high-resolution IMECE satellite next year.

“Our goal is to put Türksat 6A, Turkey’s first communications satellite, into orbit in 2022,” Erdogan said.

Production of Türksat 6A continues and uses entirely domestic sources in the capital Ankara.

It is a product of cooperation between the Ministry of Transport and Infrastructure, as well as organizations and companies such as the leading defense company ASELSAN, TAI and CTech, together with Türksat and the country’s highest scientific body, the Turkish Science and Technology Council (TÜBITAK).

This will put Turkey among the 10 countries capable of producing their own satellites. The contract for Türksat 6A was signed on 15 December 2014.

The 2030 space program will be presented soon

The national space program for the country 2021-2030 will also be presented soon by the Turkish Space Agency, the president added.

The agency was established in December 2018 to pave the way for a competitive local industry and to define strategies and policies regarding space technology.

Erdogan also said that microsatellites are becoming more visible in the satellite field, stressing that intensive preparations are under way to develop such satellites and send them into space from Turkey.

“For this purpose, we are creating a facility in our country for launching microsatellites. We support the satellite development activities of our public institutions, universities and the private sector, “said the President.

Türksat 5B will be launched into orbit in June

Türksat 5A will usher in a new era in broadcasting services in Turkey, along with authorizing the country to export services, Karaismaigloglu said.

Saying that the maneuver and service life of the Türksat 5A, which will serve in space for 30 years – much longer than other satellites – the minister said that the weight of the satellite, which requires 12 kilowatts (kW) of power, is 3500 kilograms (about 7,716 pounds).

He said the country would continue its work on space and space technology, saying tests of the Türksat 5B, which is scheduled to go into orbit in June this year, were under way.

Türksat 5B will be sent into orbit at 42 degrees east and is expected to increase the country’s Ka-band capacity.

Karaismailoglu also said that with the commissioning of Türksat 5A and Türksat 5B, Turkey’s frequency rights will be preserved, while gaining new frequency rights for communications satellites for future generations.

Karaismaigloglu noted that the integration activities of the production, engineering and flight model of the domestic Türksat 6A in the country continue at the same time and that there will soon be good news about the project.

Speaking before the launch, Turkish Deputy Transport and Infrastructure Minister Ömer Fatih Sayan called Türksat 5A “one of the latest generations of satellites that enable us to improve our capabilities in space.”

“With Türksat 5A, we would first protect our orbital rights and provide commercial services through broadcasting and communications, especially Internet services with the Ku-band for rural areas,” he told reporters before monitoring the mission of the SpaceX Center in Cape Canaveral.

Sayan said it would take about 140 days for Türksat 5A to enter orbit. Then the satellite will be tested for a month. It will be controlled at the Türksat facility in the capital, Ankara.

Turkey’s first communications satellite, Türksat 1A, was launched into orbit on January 24, 1994, but it fell into the ocean 12 minutes after takeoff due to a starter malfunction and the mission failed.

Supporting investment in satellite technology, Turkey took its place in space in August 1994 with the Türksat 1B satellite.

Designed and manufactured in Turkey, Rasat was launched from Russia on August 17, 2011.

Although the original design of the Rasat satellite was three years old, it successfully completed its ninth year in orbit on August 17, 2020.

The Rasat satellite, in a circular orbit synchronized with the Sun and at an altitude of 700 kilometers (435 miles), operates a 7.5-meter monochrome and 15-meter multi-band space camera with a piston broom.

Turkey’s other Earth observation satellite, Göktürk-1, aimed at meeting the needs of the Turkish Armed Forces (TSK) for a high-resolution image for targeted intelligence, was launched in 2016.

Located in low-altitude Earth orbit, the satellite can perform a variety of remote sensing tasks such as monitoring the environment and housing, detecting agricultural production, municipal practices, border control and cadastral activities for public institutions and organizations.

It is estimated that the life of the 0.5-meter satellite, designed to conduct research anywhere in the world without geographical restrictions, will be seven years.

This was a project funded by TÜBITAK and carried out by the TAI and TÜBITAK space team under the coordination of the National Ministry of Defense.

It can provide digital and geographical data production with the targeted intelligence needed by the TSK and in particular the Air Force Command.

The satellite has high-speed data communication that can download an image of a nearly 640-kilometer (397-mile) band in a single pass.

The Gökturk-2 project aimed to develop technology, expertise and infrastructure for space and satellite systems and to meet the monitoring and research needs of public institutions and organizations with national capabilities.