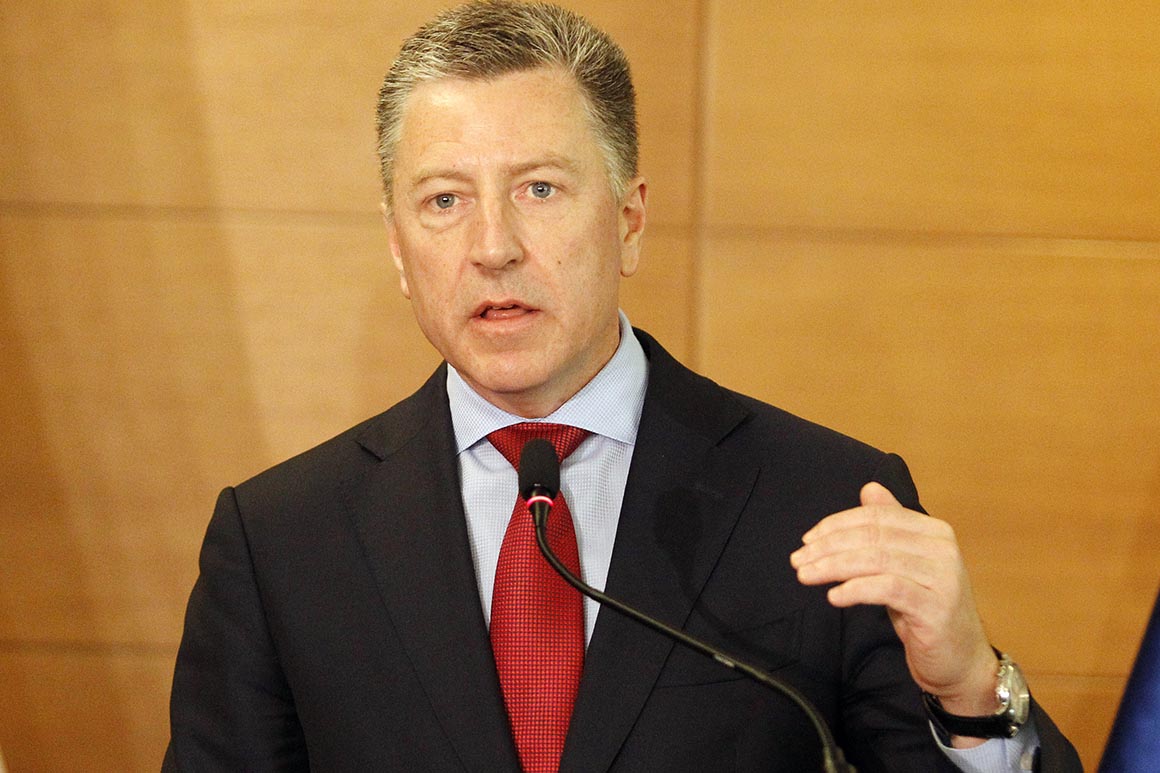 The news of Volker's departure was first reported by a student news organization at Arizona State University and confirmed to POLITICO by a person familiar with the issue.

It also comes a day after Rudy Giuliani, Trump's personal lawyer, claimed Volker had asked him to speak to Ukrainian officials – discussions that may have involved demands that Ukraine dig up dirt on former Vice President Joe Biden, the current Democratic 2020 frontrunner.

On Thursday, Giuliani publicly shared what he said were text messages from Volker. One of the messages dated July 19, shows Volker telling Giuliani he "really enjoyed breakfast this morning" before adding: "As discussed, connecting you here with Andrey Yermak, who is very close to President Zelensky. I suggest we schedule a call together on Monday – maybe 10am or 11am Washington time? "

Giuliani revealed the text messages, he said in a Fox News appearance on Thursday evening, that bolster his claim that he had fulfilled a State Department request to meet with Ukrainian officials. "He should step forward and explain what he did," Giuliani told host Laura Ingraham, referring to Volker.

The State Department "basically knew everything I was doing," Giuliani added.

Volker, who declined to comment, has not stepped forward to explain what he did. But he has not denied sending the messages. Nor have Pompeo and other top State Department officials explained what role senior leaders in Foggy Bottom played in Giuliani's efforts.

People who know Volker say he was probably well aware of the risk he was taking in deciding to work for Trump.

“You can argue about whether people should take jobs in this administration or not,” said Evelyn Farkas, a Russia specialist and top Pentagon official under former President Barack Obama, “but there are people who are well-intentioned, who think they can advance the US interest and damage control, and I think he falls into that category. ”

Volker is a former career Foreign Service officer who served as an unpaid U.S. envoy part-time, while holding other paid positions, including as an adviser to a lobbying firm and as executive director of a Washington think tank named for the late Arizona Sen. John McCain.

He largely stayed out of the limelight while in the Trump administration. His exact role in the still-unfolding Ukraine scandal remains murky, though the whistleblower whose grievance set off Democrats' impeachment push this week said his understanding was that Volker was trying to "contain the damage" inflicted on the U.S. policy by Giuliani, and help Ukrainian officials navigate Trump's requests.

Giuliani has repeatedly mentioned Volker, as well as U.S. Ambassador to the European Union Gordon Sondland, as two State Department officials briefed on his conversations with Ukrainians linked to the country's new president, Volodymyr Zelensky.

Despite his efforts, the former New York mayor has no way to rest the question of who initiated the idea of ​​meeting him with Ukrainians.

According to the State Department, it was Yermak, the Zelensky lawyer, who asked Volker to connect him to Giuliani. Yermak may have done so because Giuliani had spent much of the spring publicly talking about Ukraine-related issues, including unproven claims that Biden and his son, Hunter, were involved in corrupt activity. The fledgling new Ukrainian government may have decided to establish a link to Giuliani.

The Biden-related allegations were on Trump's mind, too. According to a White House memorandum released this week under pressure from Democrats, a phone call between Trump and Zelensky on July 25, the U.S. President repeatedly urged his new Ukrainian counterpart to look into claims against the Bidens. Trump also pressed Zelensky to connect with Giuliani and the U.S.S. Attorney General William Barr.

"Rudy knows a lot about what's happening and he's a very capable guy," Trump told the Ukrainian leader. “If you could speak to him that would be great.”

Volker was not mentioned on the call. But the whistleblower's complaint mentions his name five times, along with Sondland's. The whistleblower, whom The New York Times has described as a CIA officer, cited his conversations with other concerned U.S. officials as records that the two diplomats were well aware of Giuliani's Ukraine-related activities.

Some former officials and analysts said Volker looked foolish in having engaged Giuliani at all, given that the president's personal lawyer is a private citizen who is not formally authorized to represent the United States to foreign governments.

“He should have known better,” a former White House official said on condition of anonymity to speak frankly. “Kurt, in particular as a former career ambassador, knows where the lines should be drawn.”

Other observers suggested cutting him slack.

They said Volker – always ambitious – was more willing to pursue unorthodox methods than many diplomats if he believed he could help achieve the U.S.S. goals. Knowing how much Trump relies on Giuliani may have factored in Volker's calculations, too, some said.

"Giuliani is already doing this stuff, and then the Ukrainians are saying, 'Look, what do we do?'" Said Dan Fried, a retired 40-year State Department veteran with extensive experience in Eastern Europe and Russia. “You could say, 'Don't talk to Giuliani,' but would you really give that advice to the Ukrainians if you knew that he would piss off Trump?”

Volker, now 54, spent many years in the Foreign Service, working under multiple presidents and focusing largely on US-European policy. He served a short stint as a U.S.A. ambassador to NATO starting under President George W. Bush, earning a reputation as a skilled operator with serious policy chops.

"Always has the utmost respect for Kurt," said Alina Polyakova, a Russia and Ukraine expert at the Brookings Institution. “He is someone genuinely interested in helping to resolve the conflict in Ukraine.”

While aligned with Republicans, Volker was well-regarded among Democrats. Unlike many prominent GOP national security experts, Volker signs the "Never Trump" letters circulated during the 2016 campaign – a testament, perhaps, to his reputedly keen political instincts.

At that time, Volker explained that he wanted to be free to advise future presidents of all stripes, though he was trying to serve in an administration led by Trump. "He would actually use it as a bragging right," he told Reuters in a March 2016 interview.

That decision made it possible for Rex Tillerson, Trump's first secretary of state, to tap Volker for Ukraine envoy roll early on, while those who did sign the letters were blackballed.

"Kurt's wealth of experience makes him uniquely qualified to move this conflict in the direction of peace," Tillerson said in a statement announcing the move. Russia hawks, alarmed at the new president's overtures to the Kremlin, praised by Volker's appointment as a welcome sign.

"He brings the right experience and judgment to represent the United States as we continue in our efforts to stop Russia's aggressive actions in Ukraine," McCain said at the time.

Volker scraps, however, to make much progress in ending the conflict, though not for lack of trying — it may be an impossible task given Moscow's recalcitrance, observers say.

In the meantime, Volker's unusual arrangement with the Trump administration drew notice: He was essentially a part-time volunteer envoy who held other positions.

Those include serving as executive director of the McCain Institute for International Leadership, a DC-based think tank that is part of Arizona State University, and acting as an adviser to the BGR Group, a lobbying and public relations firm in Washington that temporarily represented the previous Ukrainian government. (BGR Group says Volker recused himself from all issues related to the government of Ukraine.)

Some former U.S. officials privately expressed discomfort with Volker's overall setup, saying it was often unclear in what capacity Volker was operating. But all stressed that they have seen no clear record of improper activity or a conflict of interest, and none has emerged publicly.

Volker's mission was supposed to focus narrowly on the resolution aspects of the Russia-Ukraine military standoff, but at times he seemed to go beyond that remit, the former White House officially noted. He spoke out, for example, on a dispute between Hungary and Ukraine over the latter's adoption of a law giving special status to the Ukrainian language.

The strangest thing about Volker's roll, a former U.S. the diplomat said, maybe it was part time given that "our relationship to Ukraine is a really important one."