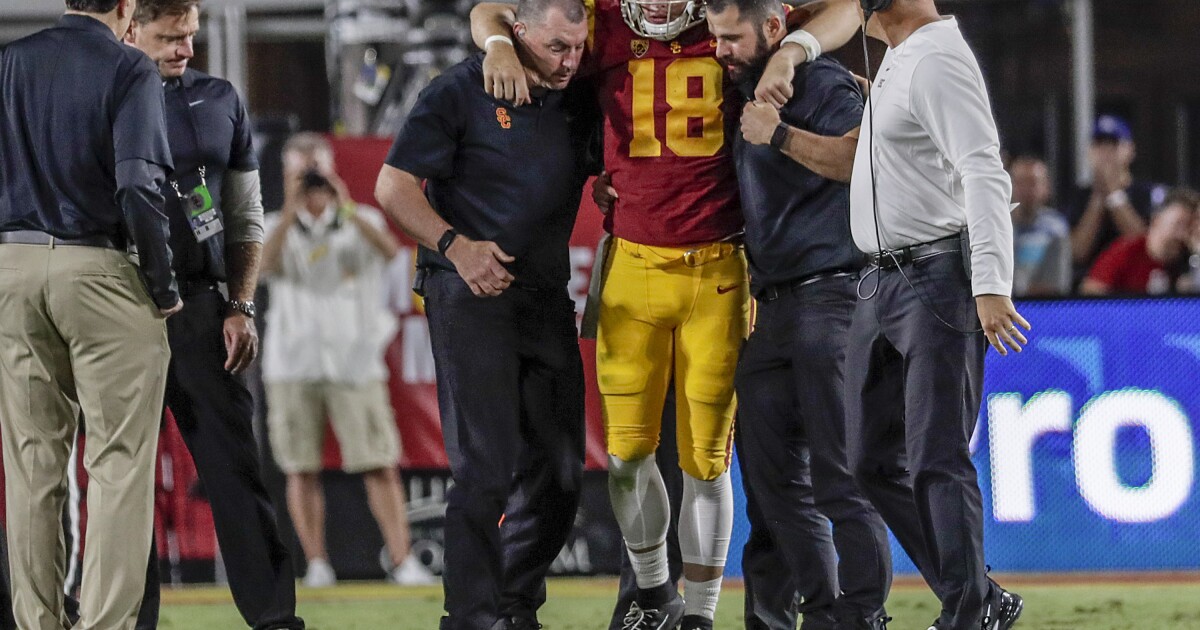 A dim, orange glow peered over the outer edge of the renovated Colosseum as JT Daniels stood behind the line of scrimmage, a new breach of his fingers, a new hope for USC football still alive.

It was possible at this point, however brief, to imagine even the most optimistic results for USC and its challenging sophomore. After a 5-7 season and everything that went astray, the Trojans and their quarterback could finally start anew.

Less than two-quarters later, Daniels lay crushed on the grass clutching his right knee, and that hope faded in stunned disbelief. A few meters from where he stood, Daniels bent over with obvious pain. With only half a second remaining, USC had more or less dominance. But suddenly the buzz of the Trojans' new crime was important. In an instant, everything had changed.

The Coliseum, reduced to disturbing noise, held its breath as a crowd of coaches knelt down to Daniels. They couldn't do a little but catch their breath. They helped Daniels to his feet, carrying his weight.

Even as USC lingers on for a season-opening 31-23 victory over Fresno State, the horror at this point lingers as a ghost during other Saturday affairs like Daniels, on crutches. viewed from the sideline. There was no update on Daniels right away, but the outlook does not seem positive after he slashes to the sideline.

"Tummy tingling," coach Clay Helton said afterwards. "You see a kid who is pouring so much into the game and into this team and he is getting better, physically and mentally, as a quarterback."

The court did not rise as staff lifted Daniels off the grass. The 19-year-old former Mater Day star started strong in USC's new offense, completing 15 of his first 17 passes. Before he dropped to the grass, he had 215 yards and a touchdown in less than half.

But now he was limping to the sideline without weighing on his right knee. It was an image that would be burned out in the collective vision of USC fans everywhere – one that, after just two quarters this season, could determine everything that comes after.

What it would mean for the near future was still uncertain, Soon a cart would take him to the dressing room, where the x-ray was negative. The MRI will follow Sunday.

As anxiety settled over the stadium, freshman Kedon Slovis slackened his hand on the sideline, his mind no doubt rose.

Suddenly the hope for USC season rests on the shoulders of a freshman who was once a forgotten member of the newest recruiting class. Until his arrival in fall camp, Slovis was unlikely to receive any significant playing time this season.