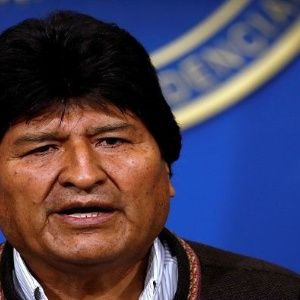 Former Bolivian President Evo Morales denies on Monday that a coup led by Carlos Mesa loses Civil Society presidential candidate and leader of the Pro Cruz Civic Committee, Luis Fernando Camacho intends to accuse his government of the violence and chaos that prevail in the nation.

"They take their responsibility for pacifying the country and guaranteeing the political stability and peaceful coexistence of our people," Morales asked in his Twitter account.

The Bolivian leader announced his resignation from the Bolivian presidency this Sunday as a step towards pacifying the country against racist and discriminatory aggression committed by opposition groups against people and fighters related to its rule.

Mesa and Camacho, discriminators and conspirators, will go down in history as racists and coup plots. That they assume their responsibility to pacify the country and guarantee the political stability and peaceful coexistence of our people. The world and Bolivian patriots reject the coup


"Mesa and Camacho, discriminators and conspirators, will go down in history as racists and coup plots," categorically denies the former president of Bolivia.

On the other hand, he said that people categorically reject the coup he was a victim of, and stressed that the world is witnessing the actions of the coup of those opposition leaders who refused to acknowledge the results of the October 20 elections. ,

Very grateful for the solidarity of people, brothers from Bolivia and the world, who communicate with recommendations, suggestions and expressions of recognition that give us encouragement, strength and energy. They moved me to make me cry. They never left me; I Will Never Leave Them


Following the general election in Bolivia last Sunday, October 20, the opposition of this nation ran a campaign to slander and discredit the process

and Camacho condemned the alleged fraud, but did not provide any evidence. In view of the violence promoted under this pretext, Morales called for an audit of a vote led by the Organization of United States of America (OAS), which, without completing its work, issued a preliminary report recommending new elections to pacify the nation.

Against this background, Morales called for a new democratic day, but political opposition again refused and continued violent action, squeezing the resignation of several government officials.

Later, the Armed Forces, the police and the Ombudsman's office "suggested" the president resign.

"I have decided to give up my position so that Carlos Mesa and Luis Camacho stop abusing and harming thousands of brothers … I have an obligation to seek peace and it hurts a lot to face the Bolivians for this reason I am sending my letter of resignation to the Plenipotentiary Assembly of Bolivia, "said former President Morales, accompanied by his Vice President, Alvaro Garcia Liner, who also left the post.

PSOE conducts elections in Spain with 70% of the data examined

They condemn the terrorist actions against the MAS authorities in Bolivia