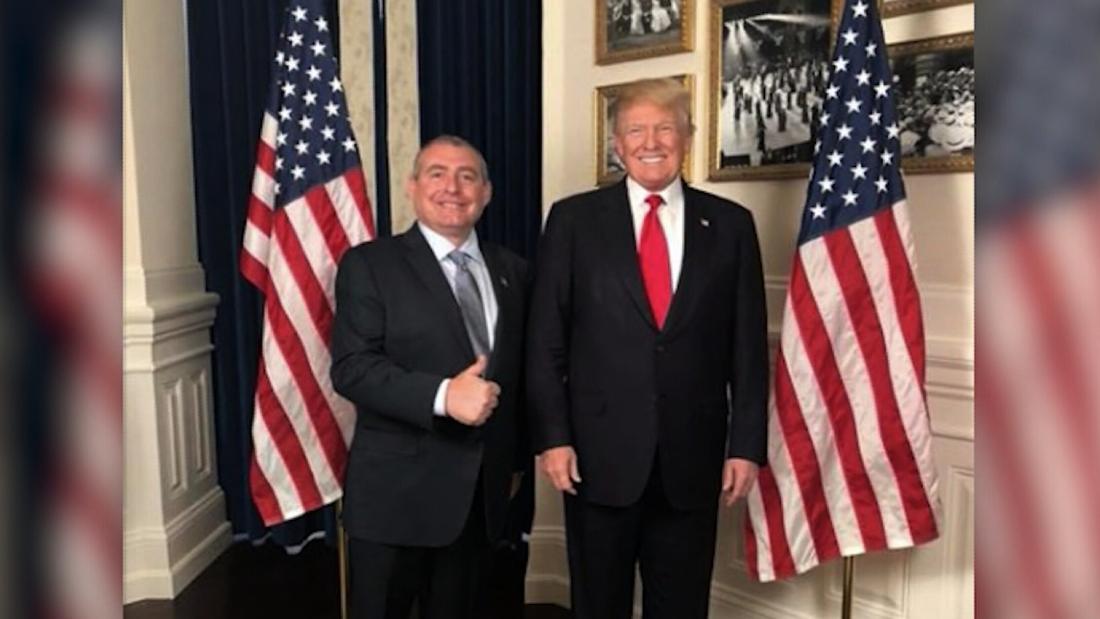 Parnas and his business partner and fellow Giuliani associate, Igor Fruman, are alleged by prosecutors to have illegally funded donations from foreign nations to Republican political campaigns in attempts to buy influenza. They are also alleged to have aided Giuliani, the President's personal attorney, in efforts to dig up political dirt on former Vice President Joe Biden.

The video of the rally is the latest example of how a couple who had a small record of donations to candidates before 2018, wielded their proximity to Giuliani and used political donations to gain access to presidential and political campaigns. Photos and videos throughout 2018 and 2019 show the pair traveling with the former New York City mayor throughout the world and political events across the country.

The footage was found by CNN's KFile during a review of Giuliani's travel and political activity , Parnas and Fruman.

Parnas and Fruman were arrested in October trying to leave the country. They were indicted on four counts, including conspiracy to violate the ban on foreign donations to federal and state elections, making false statements and falsifying records at the Federal Election Commission. They pleaded not guilty in Manhattan federal court last week to the charges. Parnas and Fruman were ordered to house confinement and subject to GPS monitoring after they each secured a $ 1 million bond.

In the videos, Parnas sits in the area directly behind Trump before and during the rally. Parnas, who at times is wearing a blue hat and glasses, can be seen apparently taking a video of the President on his cellphone as he walks up the stairs to the stage.

At another point, Parnas leaves the area behind the podium to be along the path of Trump's exit at the bottom of the stage. He waves to the president as he leaves, and the president waves back in the direction of Parnas and the crowd.

It is unclear how Parnas, who is not a Nevada native, got into the prized seating area directly behind the President. A photo from Parnas 'Instagram featured in a video by the Wall Street Journal shows he appeared to have a VIP badge for the event.

Trump has publicly distanced himself from Parnas and Fruman since their indictment.

Prosecutors from the Southern District of New York described the October 2018 rally in the 21-page indictment of Parnas, Fruman and their associates David Correia and Andrey Kukushkin, who were both indicted on a conspiracy charge. Correia and Kukushkin also pleaded not guilty.

The prosecutors wrote that "on or about October 20, 2018," Parnas, Fruman and Kukushkin attended a campaign rally for "Candidate-1" in Nevada and took photos with "Candidate- 2. " The trio then sent photos to "Foreign National-1," whose identity has not yet been confirmed.

The candidates were later identified as Republican gubernatorial candidate Adam Laxalt and authorized general candidate Wesley Duncan. Trump appeared at rally to campaign for Laxalt. A photo from Parnas' now-private Instagram, a screenshot of which can be seen in a video posted by the Wall Street Journal, shows him and Fruman posing for a photo with Laxalt previously during a September 2018 fundraiser. A spokesperson for Laxalt told the Las Vegas Review-Journal that he "doesn't know the man."

One of several midterm events attended by Parnas and Fruman

The Trump rally in Nevada was one of the many events attended by Fruman and Parnas in the final weeks heading up the November 2018 midterm elections.

In photos posted on Twitter, Parnas and Fruman can be seen accompanying Giuliani to events in Michigan, New Hampshire, Florida, Indiana and

A November 3, 2018, tweeted a few photos from Michigan Senate candidate John James showing James sitting at a table with Giuliani and Parnas. In another photo, James can be seen speaking while Fruman sits in the first row of seats and Parnas stands with Giuliani off to the side.
Pictures tweeted that same day from Giuliani and congressional candidate Danny Tarkanian show Giuliani with Parnas and Fruman while campaigning in Nevada. A video from that morning also shows Fruman and Parnas with Giuliani as he campaigns in Indiana for Senate candidate Mike Braun.
Another campaign event for then-Florida gubernatorial candidate Ron DeSantis on November 4, 2018, shows Giuliani, Parnas and Fruman among attendees according to photos shared from DeSantis's Twitter account .
Parnas was also seen with Giuliani at campaign events for New Hampshire Republican congressional candidate Eddie Edwards. Photos posted on Twitter show Edwards and Giuliani addressing supporters at several campaign events on November 5, 2018 – the day before the midterm election – with Parnas standing near Giuliani .