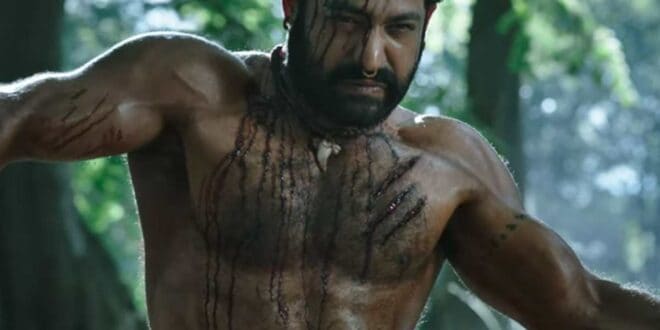 After a long wait, here is the most anticipated look of the NTR from Rajamouli’s magnum opus RRR. NTR stunned in a truncated body. Its introduction is the improved appearance of Tarak and the muscular body further raises the bar of expectations.

;, “Gondu Bobbuli” and his own “Thammudu” – “Komram Bheem”. In this view, different shades of NTR are depicted. NTR is also seen with a Muslim hat (Taqiyah), which hints at many assumptions about his character.

Overall, Ramaraju For Bheem sees the rise of Rajamouli’s brand. The images are magnificent and attractive. VFX is first-class, meeting the expectations of Rajamuli’s films. Kieravani’s background score elevates the scenes even more.

It can be noted that Charan’s stunning appearance as Rama Raju is attractive and excited by mega fans. Now the appearance of NTR is also equally captivating and intriguing. It seems that Rajamuli does not leave a stone unturned to portray the two leading stars powerfully.

a pop star reborn as a rock’n’roll