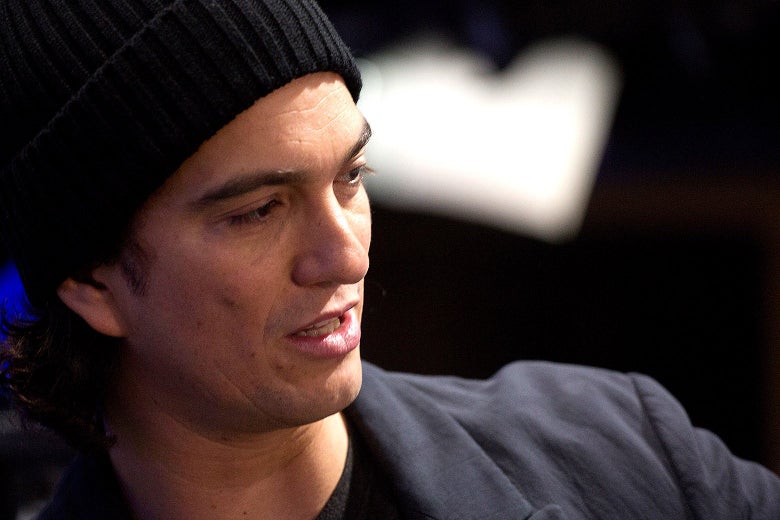 This, in a nutshell, is the story of the grand rise and fall of We, née WeWork, whose founder and CEO Adam Neumann chose to "step down" on Tuesday. He will continue to serve as executive chairman of the board, but his empire is in ruins: WeWork's IPO has been delayed indefinitely and its valuation has plummeted from $ 47 billion to as much as $ 10 billion.

What is a WeWork lesson? (Except it's a bad idea to self-deal with the almost comical extent that Neumann did.) One conclusion is that venture capital investors are not as smart as they think. For years, WeWork's estimate is in a way out of step with that of partner companies that provide office space. In 2017, Elliot Brown of the Wall Street Journal – the famous chronicler of WeWork's absurd business culture – noted that the WeWork Bureau's estimate was more than 20 times higher than its rival, IWG. WeWork was 40 times more valuable per square foot. Still, money is still pouring in: $ 700 million in bond sales last year and $ 2 billion earlier this year from Japanese telecom Softbank, which raised $ 100 billion in technology investments from sources such as Saudi Arabia's sovereign wealth fund .

WeWork seems to symbolize the pinnacle of Silicon Valley's irrational abundance and it's no surprise VCs are already trying to isolate their problems – it's a New York company; this is a softbank problem The real problem with WeWork is both more specific and more general: it is not really a technology company. And that distinction – more than control of the public and private markets – can be an important takeaway from its fall, as it is far from the only clothing company that has emerged as a technology company just because it uses smartphones and computers.

It is difficult to find many other companies that claim that their mission was "to raise world consciousness." its value. If WeWork were publicly available for the price offered by IPO bankers at Goldman Sachs – between $ 61 billion and $ 96 billion – and then it was created, Uncle Bob would have lost his retirement savings. Instead, Masayoshi Son and Mohammed bin Salman are less than a few dollars. Oh well!

Capital invested in private companies has exploded in the last five years. Critics sometimes say that the tendency of "tech" companies to delay their publication until they are worth 10 figures means that mom and pop investors miss out on profits that are only captured by the rich and well connected. Securities and Exchange Commission Chairman Jay Clayton complained that the creation of the initial value was happening before the IPO.

WeWork, like Uber before it, offers a kind of counterpoint. Even if you could invest in Uber in 2016, you would still be losing money. The well-publicized collapsing stock prices of consumer-facing companies such as Lyft, Slack, Blue Apron and Snapchat reinforce the perception that technology companies are not worth what they say they are.

It turns out that this perception is not quite correct. Yes, more unprofitable companies than ever go public, and then, in some cases, clear down. However, half of them are increasingly valuable, according to Bloomberg: Since 2017, in particular, the IPOs of unprofitable companies have outperformed the stock market by "an average of 27 percentage points in their first month".

Just not (except Beyond Meat) the names you know. An important distinction can be made between software companies such as Facebook or Palantir or Oracle and those who have to drop their hands in the world of gigs and real estate and manufacturing. The latter group includes companies like Peloton – a business that makes stationary bikes but calls itself an "automotive car company" – or Uber, which is a taxi delivery company but says it simply manages a "market." Or Sweetgreen, a $ 1.6 billion salad chain that, according to its CEO, "doesn't consider [itself] just a place for salads," since apparently many salads are ordered through an app. Or a blue apron. Or WeWork, which is obviously a real estate company with a founder who could convincingly play the role of a technical executive.

As Ben Thompson points out in Stratechery, it is in these hybrid companies that big losses occur – not just a lack of profit (which again seems equal to the exchange rate), but also a lack of confidence that there will ever be a profit. "Looking at 29 US IPOs over the last two years, 20 have grown by a market cap over their price range, and they are all pure technology companies with high margins," Thompson wrote. Adding an additional 100 users does not cost Adobe or Citrix; for WeWork, this requires a big new 10-year lease – and a huge red mark on the balance sheet. You cannot code your skyscraper output.

It is a reminder that so much of the technological advancement we take for granted in the world – taxiing on demand, electric scooters at every corner, grocery stores without carts, cars that can be parked – rests all over batch of operating losses and cross-subsidization. Not all technology, but in particular the technology we can see : the body-oriented, consumer-oriented products we love to use. When the market turns around, when the Masayoshi Sons of the world are tired, everything can disappear.

This makes me think of Concord, a supersonic passenger plane that flew so fast it could land in New York earlier than it left London. Only a long government program of research and development made it real, but forces were already turning against the aircraft before its infamous fatal launch in 2000, when 113 were killed in an incident at Paris Charles de Gaulle Airport. The plane was too strong. The fuel was too expensive. No airline wanted to buy this. Just because we invented it, it didn't mean we had to stay here.

Obviously WeWork did not invent something as interesting as this. That's why, ironically, his chances of survival seem high: WeWork's offices look like places that might help you get the job done – if not, it might elevate you to a state of higher consciousness.

Readers like you make our work possible. Help us continue to provide reports, comments and reviews that you won't find anywhere else.