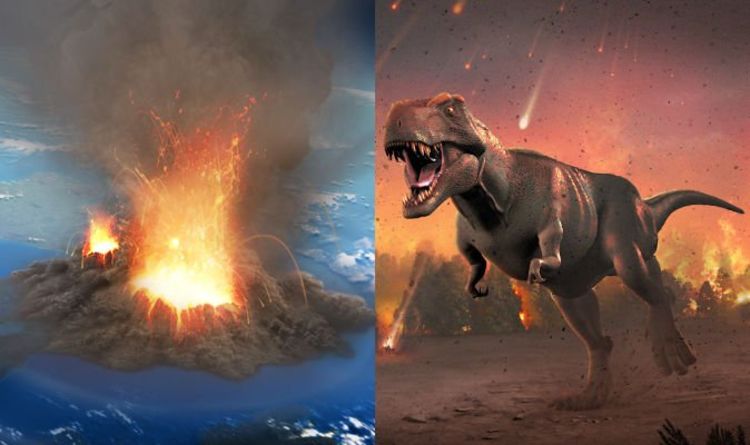 Millions of years before mankind walked the Earth, the dinosaurs ruled the world. It was commonly assumed that the dinosaurs' demise was triggered by a massive asteroid that slammed in the Earth 66 million years ago. But a pair of landmark new studies have shown a huge volcanic eruption contributed to the giant prehistoric reptiles' extinction

Volcanic eruptions spewing climate change gases into Earth's atmosphere destroyed the dinosaurs long before the asteroid killer arrived. according to groundbreaking new research unraveling the mystery of how the dinosaurs were wiped off from the face of the Earth, after walking the Earth for millions of years

While the discovery of the Chicxulub crater in the Caribbean seems to confirm the impact of an enormous asteroid sealed on the dinosaurs' fate, the solidified lava field of India's Deccan Flats alters that narrative.

Measuring more than 2 kilometers thick in some places, these rocky stretches in India are evidence of massive volcanic activity that took place around the same time.

By using uranium and lead within minerals from the solidified magma, scientists identified four enormous volcanic events that began thousands of years before the asteroid

During this period, temperatures increased by around eight Celsius as

These new results were released alongside another contemporary study, which arrived at a slightly different conclusion

Their dating basalt rocks of the Deccan Flats appeared to show most of the eruptions took place after As Court's Spree, a geoscientist at the University of Liverpool who led the second study, said this did not mean the volcanoes played no role in the extinctions.

The team suggested that instead of gas blasting out as the volcanoes exploded, they leaked out gradually in years b

While a definitive answer to the question of what killed the dinosaurs remains elusive, Dr Sprain and her colleagues argue that this was probably the result of a "one-two punch" from both the volcanoes and the asteroid

Rapid warming of the earth's climate may have left remaining creatures adapting to life in hot conditions, only to be faced with rapid cooling after dust from the asteroid impact blotted out of the sun