When Stars Collide: Unravel the 16-Year-Old Mystery of the Blue Ring Nebula 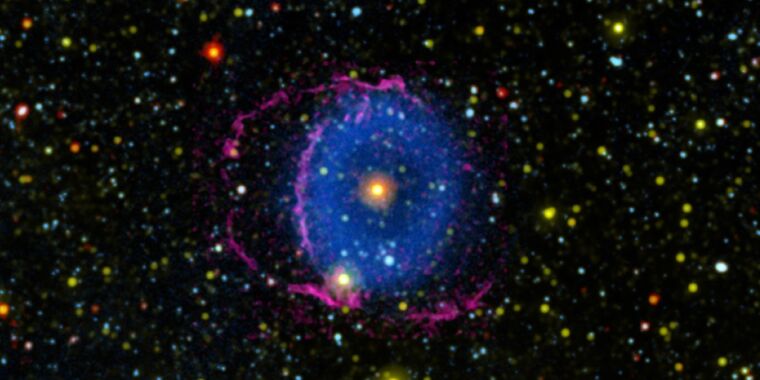 It took 16 long years, but astronomers have finally solved the puzzle of the mysterious Blue Ring Nebula, according to a new report published in Nature. First seen in 2004, the star with an unusual ultraviolet ring appears to be the result of a fusion of two stars, ejecting debris in opposite directions and forming two glowing cones. It looks like a blue ring to us because one of these cones points directly to Earth. This makes the first observation at a rare stage of stellar evolution, after only a few thousand years in the process, similar to capturing the baby̵

The story begins with the so-called GALEX mission (Galaxy Evolution Explorer), a study of the entire sky in the ultraviolet band of the electromagnetic spectrum, which was in operation from 2003 to 2013. Caltech physicist Chris Martin was PI for GALEX when his team noticed an unusual object: large, pale spots of glowing gas with a star in the center. GALEX makes measurements in both distant UV and near UV bands, but while most objects observed by GALEX appear in both bands, the stunning blue ring around the star, called TYC 2597-735-1, only appears in the far UV.

Intrigued, Martin decided to investigate further, confident that he and his team could come up with a viable explanation by the end of the year. He thought that the Blue Ring Nebula was most likely a remnant of a supernova or perhaps a planetary nebula formed by the remains of a star about the size of our Sun, although they usually emit light at multiple wavelengths outside the UV range. But it turned out to be a far more nodal problem.

Martin and his team spent the next few years studying the nebula, using as many different space and ground telescopes as possible. They realized that there were actually two rings offset from the central part of the surrounding nebula – also consistent with the fact that it was an impact nebula. A review of archival data on the central star showed that there was excess emissions in the infrared region, suggesting the presence of a disk of dust that absorbs the star’s light and re-emits it in the infrared light.

“It was extremely surprising because this nebula looks like something that is created after a star ages and stops burning hydrogen and maybe turns into a white dwarf, like a planetary nebula,” Martin said during a virtual press conference. “But the orbital disk looked like something we’d see in a young star.”

The next step was to use a high-resolution spectrograph at Hawaii’s WM Keck Observatory to search for evidence of a satellite around the star. The team found nothing as massive as a star, but hinted at what a “hot planet Jupiter” could be near the central star. Although the evidence was ambiguous, “our working hypothesis was that hot Jupiter turned into a star and created some kind of fire that caused what we thought was a bipolar leak,” Martin said. “But it became impossible to come up with a scenario to explain all this [conflicting] observations, so after a few years we continued to do other things and the project remained dormant. “

Back to the case

Fast forward to 2017, when Kerry Hodley joined Martin’s team as a postdoctoral fellow. Hoadley took on the task of assembling all the pieces of the puzzle to explain this paradoxical object. She soon found that the glow from the nebula was the result of hydrogen atoms being excited when the shock front formed, causing them to glow with visible light. Meanwhile, a reverse shock wave moves inward, causing the hydrogen molecules (not the atoms) to also be excited and glow in the ultraviolet mode. “We have seen other objects in the universe emitting these same molecules in the same way, and it was not our initial guess as to what excites the molecules in this case,” Howley said at the news conference.

As for the hot hypothesis of Jupiter’s work, the collaboration with colleagues from the Hobby-Eberly telescope’s Habitable Zone Planet Finder in Texas confirmed that there is no compact object orbiting the star. “After all, we didn’t think we saw a planet there,” Howley said, prompting them to consider other alternatives.

To help tie everything, Hoadley and others. turned to theoretical physicist Brian Metzger of Columbia University, who agreed that the evidence did not favor a clash between the star and the planet because the nebula was moving too fast and had too much mass. He believed that the stellar collision was the most likely explanation for the Blue Ring Nebula, and that the unusual properties that astronomers had observed were because they caught the fusion at just the right stage. The models of stellar evolution confirmed this hypothesis.

So what actually happened? Astronomers now believe that several thousand years ago, a star the size of our Sun had a smaller star in orbit around it. With age, the larger sun inflated, bringing its outer layers closer to its star satellite. This smaller star siphons debris from its larger partner, forming a disk, but is eventually swallowed by the larger star. Then this merger launched a cloud of debris into space.

This beautiful blue ring is the outflow of all these debris, forming two cones that flutter outward in opposite directions. From the Earth’s point of view, we see a cone with its head, and the second cone turned back just behind it. (See the animation above.) According to Metzger, a likely mechanism for this biconical geometry is that the original disk was created around the smaller star as it began to spiral into the larger star.

But in the last immersion, so to speak, more materials were thrown in all directions. This new material struck the original disk, which essentially cut it in two, redirecting all the ejected material in a bipolar leak. As the millennia passed, the expanding cloud of debris gradually cooled and formed molecules and dust, including hydrogen molecules, that collided with the interstellar medium. This caused the hydrogen molecules to emit distant ultraviolet light, which eventually became bright enough for GALEX to notice.

A Rosetta Stone for stellar evolution?

Howley admits that some members of the team were disappointed with the findings because they had their hearts on the “planetary destruction scenario.” The two-star collision seemed less interesting.

“But that’s not true of this case at all,” Howley said. “We capture the Blue Ring Nebula and its central remnant of a fusion of stars at a time when we have never seen an example of it before. it throws out a lot of mass and that mass cools and condenses into dust and other molecules. This quickly blocks any view we have of what is happening at the base of where the fusion took place. “

The merger with the Blue Ring Nebula has not just happened, but it remains “in a state where things are very unstable and the whole system is still shaken by this event,” she continued. “So this is the best, beautiful system we can study to test our theories about the evolution of these systems to explain the different stellar populations we see there.” Both she and her colleagues have enough time to continue studying it. The Blue Ring Nebula is expected to last somewhere between 1,000 and tens of thousands of years.

That’s why Metzger described the Blue Ring Nebula as a Rosette Stone object, given that astronomers believe that stellar mergers are actually quite common. “Somehow we have an idea of ​​how a star develops throughout its life, and mergers can have a dramatic impact on how stars develop,” he told a news conference. Astronomers occasionally notice unusual types of stars and suggest that they may be the result of stellar mergers. “But we have no way to confirm that by the time we see these stars, the equivalent Blue Ring Nebula of these mergers has long since dissolved.”

The next step is to hopefully find more such events at the midpoint, preferably including stars with different solar masses. “Through these different combinations of mergers, we could further test our ideas about how diverse these merger results are,” Metzger said.