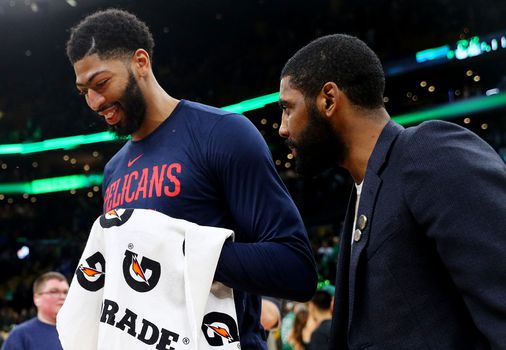 But the likelihood of an Irving return seems to be decreasing. However, sources said, it is clear that the Celtics' pursuit of Davis will push forward.

It is widely known that Celtics have the shiniest collection of assets for a potential Davis deal, but there are questions about how far they would open their treasure chest. One league source said the uncertainty surrounding Davis's long-term future in Boston has so far limited the Celtics' willingness to overwhelm New Orleans with an offer

Davis's camp has insisted for months that if Davis is traded to the Celtics, he will play out the final season of his contract and then move on after becoming a free agent. Davis's agent, Rich Paul, who also represents LeBron James, has doubled that notion in an interview in Sports Illustrated this week.

If Irving leaves this summer, and Davis departs one season after Boston surrenders key assets to acquire him, it would set the Celtics back for years.

Although the tenuous situation may have affected the Celtics' trade offers so far, sources said Boston remains quite interested in Davis, irrespective of Irving's future

There has been some suggestion that the Pelicans will push to complete a deal soon so they will have more time to evaluate the prospects they could select with whatever draft picks they receive in the trade. But a league source said that notion has been overblown and that New Orleans is confident in its multi-year evaluation process of current prospects.

The sources confirmed the general notion that the chase for Davis is setting up to be a showdown between Celtics and Lakers. Los Angeles would appear to be in a position of strength, knowing that Davis will almost certainly stay there long-term if he is acquired.

But some sources believe there is still some bitterness among the Pelicans ownership group about how Paul and the Lakers essentially worked in tandem when Davis asked to be traded before the February deadline, even though Pelicans owner Gayle Benson was publicly more open to the possibility of doing business with the Lakers

For Celtics, the opportunity to acquire and superstar such as Davis has been the goal all along as they stockpiled assets and young players, and they will continue to pursue the opportunity regardless of Irving's future with the team. But there is no doubt that Irving's departure would deflate the championship momentum the Celtics had been hoping to build

Warriors star Kevin Durant, who has long been linked to Irving in free agency, was a longtime Roc Nation client before he and Roc Nation executive Rich Kleiman branched off to form their own group, 35 Ventures. Also, Roc Nation President Michael Yorkmark is Brett Yormark's twin brother of Nets CEO. There was a lot of dots to connect.

When meeting with reporters last week, Celtics president of basketball operations Danny Ainge did not have a very optimistic tone when referring to Irving's situation. When he asked about the risks involved in making a future deal, he closed his press conference saying: "We have a risk of trading for Kyrie, and no matter what happens with Kyrie, I will never regret that. You can just move on to the next deal. "