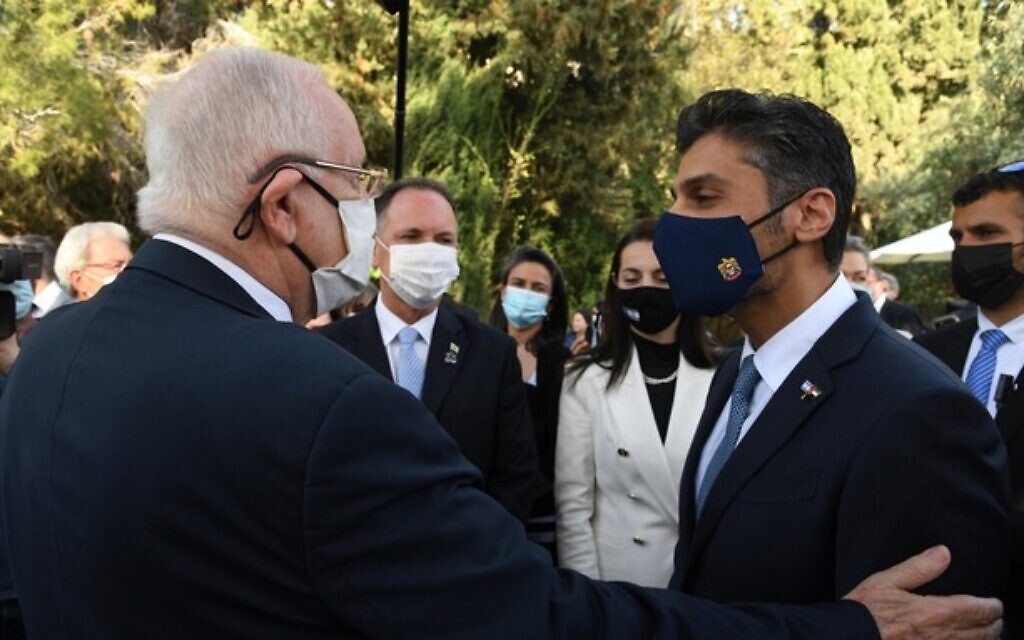 Traditionally for Independence Day on Thursday, President Reuven Rivlin hosted the foreign diplomatic corps at his residence in Jerusalem, this time with some new guests: the newly appointed envoys to Israel of the United Arab Emirates and Morocco.

The two nations have recently normalized relations with Israel.

According to Channel 12 news, the ambassadors of Jordan and Egypt also attended the event, after avoiding it in recent years.

Rivlin, whose term as president ends this summer, told those present that “on this Independence Day, we are also celebrating the new spirit of peace that is spreading in the Middle East.”

Earlier on Thursday, the official Twitter account of the UAE embassy posted a photo of the Israeli and Emir flags side by side with the caption: “The UAE Embassy in Israel wishes the citizens of Israel a happy Independence Day!”

The Emirate of the United Arab Emirates in Israel congratulates the citizens of the State of Israel, Happy Independence Day! pic.twitter.com/Y05OOSPOaI

– Embassy of the United Arab Emirates in Israel (@UAEinIsrael) April 15, 2021

Rivlin added: “Relations between nations are growing stronger, demonstrating that the path to peace is through people-to-people cooperation and cooperation that benefits both countries, not attacks on Israel in international institutions.”

He apparently referred to the International Criminal Court’s decision to investigate Israel and Hamas for alleged war crimes, at the request of the Palestinian Authority.

“My hope and prayer is that the expanding circle of peace will bring our Palestinian neighbors closer,” he said.

Rivlin told the assembled diplomats that “he is particularly happy that we can celebrate here together, despite the pandemic.”

He said he had always found “great friendship and appreciation for Israel” during his travels around the world as president, “because of its vibrant democracy, cultural diversity and innovation.”

He said international cooperation was now more important than ever as the world tried to end the coronavirus pandemic with global vaccination mechanisms.

He also warned that Iran was threatening regional stability and peace, and said Israel would “not accept” threats to its existence and would do everything in its power to stop those who want to harm it.

Earlier in the day, the president hosted another annual ceremony at his residence to award the army’s annual quotes for excellent service to 120 soldiers and officers of the Israeli Defense Forces from various military units.

“As a child, I grew up in the days when we didn’t have a state. For me, Israel[‘s existence] it was not a given, “Rivlin told the soldiers as he recalled the 73rd year of Israel’s history. “For the young generation today, the powerful and strong state of Israel, innovative and prosperous, innovative and happy, is an existing fact.” 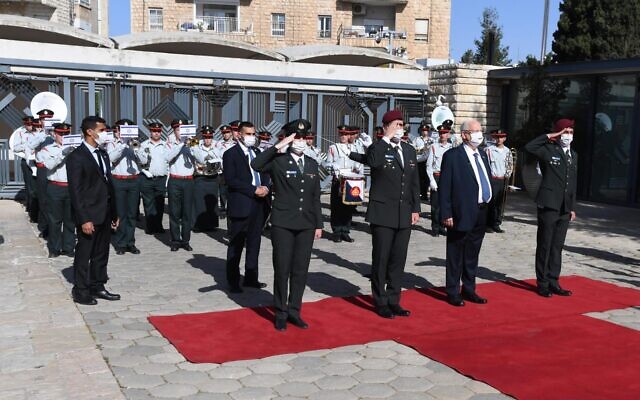 President Reuven Rivlin (CR) with IDF Chief of Staff Aviv Kohavi (CL) during an Outstanding Soldiers event as part of the celebration of the 73rd Independence Day of Israel at the Presidential Residence in Jerusalem on April 14, 2021 )

“But our inner building, the work on our nation and society, is not over yet,” he said.

“I am touched to stand before you today for the last time as president. On this Independence Day, you give us 120 reasons to be proud, “he said, adding that” even if it seems that we as a nation are struggling to agree on the road, we have not lost our way, “probably referring to a street that left the country without a stable government for more than two years.

Independence Day celebrations began Wednesday night with an official torchlight ceremony on Mount Herzl in Jerusalem and continued throughout Thursday. Hundreds of thousands of Israelis visited national parks, museums and various events throughout the day after the restrictions on the coronavirus were significantly eased.

For only $ 6 a month, you can help maintain our quality journalism while enjoying The Times of Israel WITHOUT ADVERTISING, and access to exclusive content available only to members of the Times of Israel community.