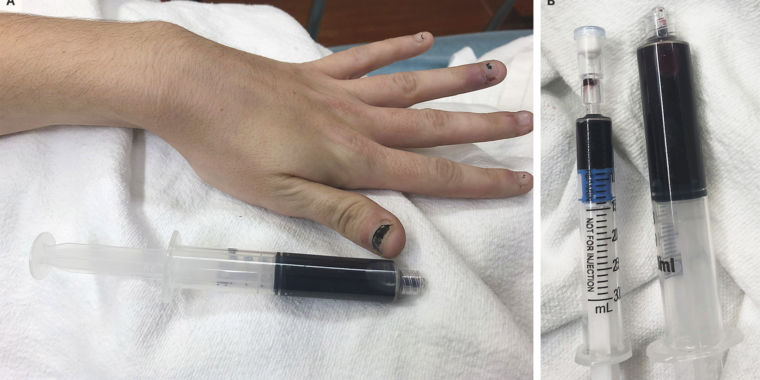 A 25- One-year-old woman showed up at an emergency room in Providence, RI, with fatigue, shortness of breath, and — most concerning — an obvious blueish hue.

The skin discoloration suggested that her body wasn't getting enough oxygen. When doctors drew some of her blood, it appeared as a dark, chocolate-brown color rather than the usual vibrant red.

It turns out the woman was suffering from an unpredictable condition called methemoglobinemia, which can be brought on by certain drugs or, in some cases, can be inherited. In this case, culprit was benzocaine and topical treatment was used to relieve her toothache. Benzocaine is commonly used as a local anesthetic in other over-the-counter products for things like minor cuts and poison ivy.

Generally, methemoglobinemia is a blood condition in which oxygen-carrying protein in red blood cells — hemoglobin — is chemically altered so that it does not release oxygen to the body's tissues as usual. Specifically, the four iron atoms in hemoglobin are oxidized from their normal ferrous state (Fe 2+ ) to a ferric form (Fe 3+ ), making methemoglobin, which is essentially useless as

Typical levels of methaemoglobin in the blood range from 0% to 2%. Symptoms start appearing when the level rises to 1

0% to 20%, and a level above 70% can be deadly. Lab tests showed the Rhode Island woman's methemoglobin percentage was 44%.

Although it's rare, methemoglobinemia is worth noting because it can be brought on by common medications, and susceptible people probably have no hint that they 're at risk until the condition occurs. It can obviously also be life-threatening if not treated. The first-line treatment for the condition is a drug called methylene blue, which can spur the enzymatic reduction of the iron back to its normal state.

The woman in this case made a full recovery after intravenous treatment of methylene blue, her doctors reported in The New England Journal of Medicine.

They note that the condition "may occur after exposure to a number of medications" but that it seems to occur "through metabolic pathways that appear to vary from person to person, which may account for the unpredictability of this complication. ”

A list of some of the oxidizing medications that can cause methemoglobinemia can be found here (Table 1).

Last year, the Food and Drug Administration warned that over-the- counter drugs containing benzocaine should not be used to treat infants or children younger than 2 years old for this very reason.

The agency estimates that more than 400 cases of benzocaine-associated methemoglobinemia have en Reported to the FDA or Published in Medical Literature since 1971.