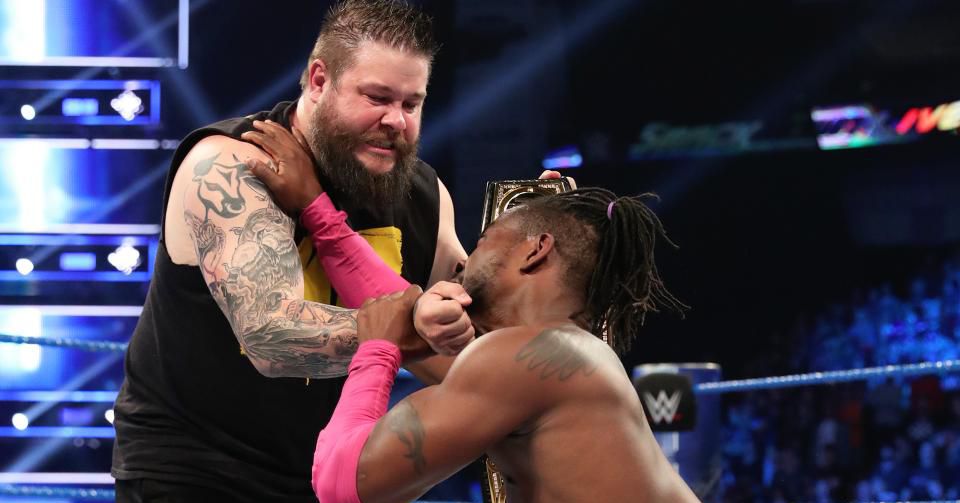 Welp. I doubt any of you got very good betting odds on this result, but feel free to cash in your tickets.

Kevin Owens has already turned on the New Day

And you know what? I'm totally fine with it.

All throughout this show, champions have been interacting with potential challengers. Finn Balor had to hold off Andrade. Becky Lynch was confronted by Charlotte and Bayley. Hell, even the IIconics are working towards a feud … maybe.

But the WWE Champion? Defiance of Daniel Bryan's presence, Kofi Kingston was suddenly without any challengers. He was still on the high end of his dream.

Welcome back to reality, champ.

Kofi had a singles match against Shinsuke Nakamura's main event this show, and it was good! Nakamura's sliding German Suplex thing is cool and they both rose to the occasion of the main eventing show. When Kofi hit Nakamura with a S.O.S., however, Rusev interfered to break up the pin attempt. The match was thrown out and we got a scuffle that left Kofi and KO in the ring. And … well. Kevin Owens did Kevin Owens things

Now here's what I like about this: they are not throwing softballs at Kofi to pad his reign. He's facing a legitimate world-class challenger here in KO. And with Big E injured and now Xavier Woods potentially facing a storyline injury, Kofi's safety blanket has been stripped of him. He's going to have to sink or swim at the very top on his own.

That's intriguing. That's different. We usually do not see guys like Kofi make it to the top and have to deal with this kind of challenge. There's some real mystery with how it's gonna go. On top of that, Owens has been foremost, as he's always brilliant at doing. When he returned, he mentioned ̵

1; and I'm severely paraphrasing here – that he got his priorities back in order. He knows what is most important again. Well, that's always been providing his family in the past. And now we've come full circle.

I'm excited for this feud. It could be really fun

Charlotte Flair acting as a snotty entitled brat? Bayley with a backbone? I do not even need a blazer – I'm in.

There's not even that much else to say, is there? Charlotte whined about losing her title without being pinned in spite of the "Winner Take All" stipulation, which is exactly what we've come to expect from the Queen. Lynch did her best to explain how the winner took all the work but ditched that approach and started talking about what she wanted: to fight new fights and move on to new opponents

And we all want that to some degree, right? I've been waiting for Ember Moon to get a shot at a title, personally. And what Lynch is proposing sounds perfectly reasonable

… Well here's the problem. Are these new opponents she has in mind? They need to be able to defeat Charlotte. And despite her whining and complaining, despite a serious edge to Bayley and a very competitive match, Charlotte still came out on top

Roman Reigns accepts Elias' challenge – The thought that WWE would ever punish Reigns is stupid, okay? As a viewer, I'm not going to accept that idea because I know better in reality.

With that said, if they really lean into the absurdity of McMahon's ego and let Shane and Elias play off of one another, that could be really good in the coming weeks

Finn Balor def. Andrade – I'm not really a fan of how this match was framed in the end, but these two can really tear the house down. They did not even make anything out of the ordinary, did they? And yet by the end, the crowd was completely invested and celebrating a dub for the good guy.

Back to that frame for a second; this was basically the inverse of their match last week and Tom Phillips concluded the segment by basically saying "well, they're both on SmackDown!" And I get it, the whole roster and company is in chaos these days. It would still be nice to have a clear direction for champions, though.

Kairi Sane def. Peyton Royce – I honestly get a huge kick out of the IIconics cutting promos and losing fast. It's freaking hilarious. Also? You get someone who has your back like Billie Kay with Peyton's. Dehydration is a serious issue.

I'm pretty pretty for this feud between Paige and her former teammates in Absolution.

I'm intrigued, Aleister Black – Black got an interesting promo backstage where he sat down and talked about perception. We've all seen him wrestle by this point, but what do we know of him, exactly? According to Black, the appearance of who will inevitably evoke a judgmental reaction. Which, if you look at the guy … yeah. Makes sense

Here was the interesting bit, though. Black claimed that if we give it time, we'll see "the world [we] grew up in condemnating him." Setting up as a bit of an anti-hero? And heel? Lars Sullivan beats up everybody – He beat up Chad Gable who found Balor's old baby oil stash, Singh Brothers, and R-Truth who made and run in after the fact. And then, if I read his lips correctly, said, "That was so stimulating." Good lord, Lars