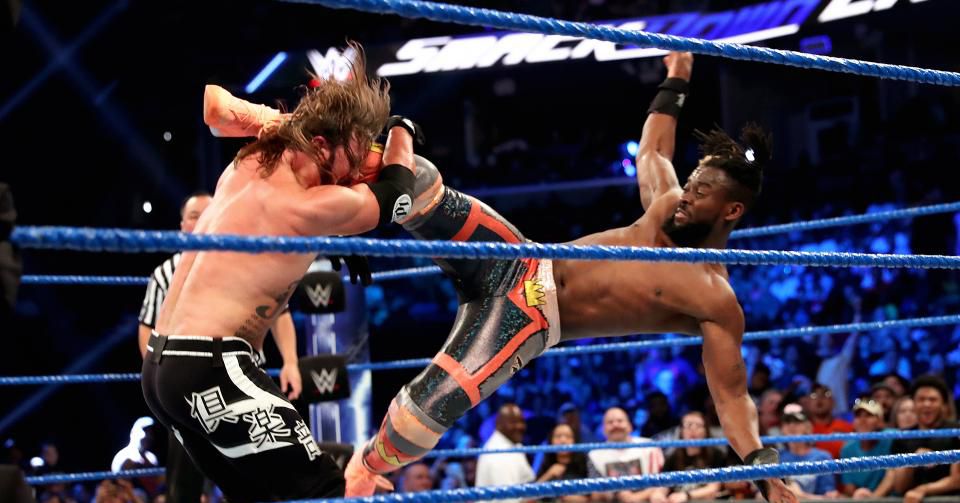 WWE Champion In One Corner. The other, the US champion.

Wait … shouldn't that be a 6 person tag match? Have I ever dreamed of such a promotion?

I actually prefer the WWE wait to book this match. The new day against OC must be for something even if I'm not sure what it is right now. Needless to say, when you turn all these champions into something, you have your main event of the evening.

The match exploded into a chaotic ring-slide mess after a trade pause, teasing how awesome a feud between these two factions could be. There was also killer cover when Stiles climbed the top rope straight into Trouble in Paradise.

However, the thing about this game is that it is preceded by a promotional package from Kingston SummerSlam opponent Randy Orton. And he shot home exactly what he said last week: Coffey has to take an act to be who he is. All Orton ever had to be is himself, because in his mind he is so much better than Buckets.

And when you hear the New Day cut the promo, when you see the pancakes, the leak, the trombone … well. Orton's video package amplifies the feud without even showing it in person. But even Orton can't deny that Coffey did it all himself ̵

1; just like in this show, winning the United States Champion.

The show is quickly interrupted by a match for the main event with Roman Reigns, heading down the corridor where he was to be interviewed and issue the SummerSlam Challenge. It was quite a surprising result, even if the numerous interruptions of the camera as Raines walked the hall were refuted by the fact that something would happen to him.

Roiance will rise and walk away from the ruins, surprisingly. He also shook off the help of paramedics who rushed to the scene. I imagined that he was overplaying how well these doctors helped his friend Seth Rollins on Raw.

Yes! The question is clearly "when?" It doesn't look like Samoa Joe's cup of tea; he, as we saw on Raw, is inclined to enjoy using his bare hands to cause pain.

And who can it be? My money is for Daniel Brian.

Brian was destined to present some message of a career change in this show and he refused to speak in recent weeks after complaining about his failure to tag teams on the main stage of the event. Is trying to kill the reigns of "going further than Daniel Brian's before" that Brian promised?

If it's Brian, I look forward to the explanation.

That's the cliché. This is confusing. It's unoriginal But despite the "hey vet, stop eating all our time" routine that Dolph Ziegler has literally used lately, I'm excited to see Stratus vs. Charlotte on the big 4 PPV.

Trish was interviewed by Jerry Lawler because Memphis will always cheer this dude on. My city just can't help it. Just as we can't help but throw out Nashville at every opportunity.

Anyway, they talked briefly about the Crude Harvest before Charlotte came down to do what I mentioned. She challenged Trish to a match, and Trish didn't respond immediately. Charlotte accepted that this meant that Trish was frightened and non-verbally acknowledged that she could not obtain the new crop of talent, and Trish quickly managed to overcome the trail of thought.

SummerSlam Game. I am vicious.

Kevin Owens def. Drew McIntyre – At first, I was kind of cynical about that. Oh yeah, Owens, it's not about Shane when this match is clear for Shane. Why else would McIntyre be here?

But then they were fighting and, uh … yeah, I'll stop the cynical stuff. Good coincidence!

Black is back in self-imposed purgatory, getting a challenge from Sami Zayn – Interesting new wrinkle, here. He talked about waiting for us to get to what he was trying to do for himself. He mentioned the blood of his soul and that he was seeking salvation, so that the picture began to become clearer.

Well, Zayn says Black is full of her. What he is actually doing, according to Zayn, is a slave to the whims of parasitic fans. He is trying to support his mysterious persona in their favor and what he really needs is someone to come out and strip this riddle of him so that he can be healed.

… May your moles be firmly rooted there, Sam. [19659026] Alex Bliss and Nicky Cross Def. Bailey and Amber Moon – Hell, what a power play from Bailey.

She threw herself into the moon behind the scenes to remind SummerSlam's enemy how lucky Bailey had chosen her. And when Luna blew the match, Bailey hit Amber with Bailey to the stomach for good measure.

You have a very good road, Amber. And frankly, that's probably the criticism of WWE with this feud. How the hell is this feud supposed to help Ember if she is booked and not to rise to the occasion?

That Fun House of Firefly – The images were so good. From the original frying pan to the Ramming Bunny cake, the Rabbit almost scattered the beans on the Fun House again, without Wyatt's masked and murderous gaze, to Sister Abigail's portrait on the wall behind Wyatt as he said, "Let me go," there were tons of likes.

Delph Ziegler Def. Finn Balor – But here's one problem I had with Wyatt in this show. His involvement in this match just didn't feel that special to me. He did what everyone does and Balor does what every stupid good person does by just standing there and distracting himself.

It wasn't bad; it just wasn't as special as I would have liked.

Another solid show! I had a lot more problems with this one than Raw, but it's still a positive trend. I'm most concerned about Amber right now, but I'm also a little concerned with The Fiend stuff. They really need to find SummerSlam just because of Bray.

It's your turn, Cageside!

“I have another creative object”

Willow Smith reacts to mom Jada Pinkett Smith, who talks about her relationship with August Alsina