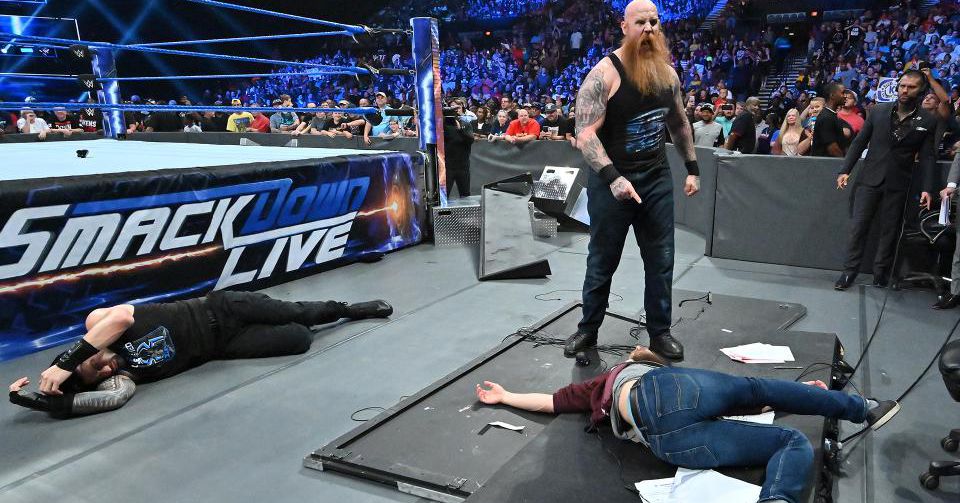 This riddle "Who invaded the Roman reigns?" Was a hell of a cart. First we had the initial attacks, which were … interesting. Some skeletons fell to end an episode of SmackDown on a weird rock, and a camera was attached to the front of the car that almost descended to Reigns. This kind of comical blunder takes away from the seriousness of someone, you know, trying to kill Roman Reigns.

Then we will be questioned by Buddy Murphy. They were excellent in my opinion. They also seem to suggest Brian as the culprit … but then he pulled out for a few more weeks, adding Eric Rowan to the mix. They lost me again.

But this? An Eric Rowan who completely came across and betrayed Brian's confidence? Fun!

I really like Rowan's motivations here as well. He was controlled by Bray Wyatt before making a solo run, which was not much. He partnered with Luke Harper before being nailed to Brian's cause. And that's his main problem here: he's tired of subjugating others. He is his own man and will do whatever he wants.

We now lack the motivation to attack Reigns. He really gave us nothing on that front except "I loved to hurt you." And frankly, that's a perfectly good motivation for a minor villain.

Who has to say where it's headed, but it could be the beginning of a redemption arc for Brian. Maybe someone was in Rowan's ear in the shadows. There are intrigues here and that is more than enough for me right now.

I remember complaining about Chad Gable performing in a resume a few weeks ago. Laughing heels at his face and making fun of him for his height just seemed like an idea destined to fail.

Well, that shows what I know. I forgot the most important thing: Chad Gable is really scary.

He is good at accepting reconciliation when Samoa Joe interrupts his routine before the match. He's good at the sad eyes that Joe accuses him of having – you know, the ones who show that short jokes still hurt him. And more than anything else, he is devilish good at fighting.

When this King of the Ring tournament started, I was put on a mental rebound against Andrade as the final. Leave it to Gable to ruin this plan in a fun way. He and Andrade killed him, delivering my favorite match of the night. There was one great moment when Andrade went for the Three Amigos, which Gable became a trio of German Suplexes. Eddie Guerrero? Kurt Angle? Is that you?

So yeah, I was totally wrong about that. Gable is ready, willing and eager to be king.

Bailey came out in an intensely mixed reaction to open the show where she tried to turn her attack on Becky Lynch in a positive light. In fact, she is just loyal – an extremely important feature for everyone! On top of that, she's just trying to give other options and make the SmackDown Women's Championship as important as the Raw Championship … thus hinting that she's actually overshadowed by Lynch.

But hey, a few chairs of pictures of Charlotte will totally make you face. Is it, Bailey?

Orton vs. Kofi Kingston Feels Extremely Shadowed – Speaking of shadows, this feud feels like it just doesn't matter. Orton has a rebirth on his side, Coffey's friends are missing … and it still feels inevitable that the champion will eventually win. It doesn't pull my emotions the way I hoped.

King of the Ring, Round 2: Elijah Def. Ali – Ali is a muck, man. This match actually made me think of the whole tournament. Think of all the men who won't win and still look great in defeat. Murphy, Cedric Alexander, Apollo Crew, Drew McIntyre, Cesaro … now Ali.

Elias followed Ali's leg for most of the game and eventually managed to use it to hit Drift Away. At first, I was shocked by this result. I am much more in the fight with seeing Gabel win the crowd so well.

Aleister Black def. Shelton Benjamin – I really liked that Black's images were torn from his clothes in anger. All this self-imposed exile waiting for someone to knock on his door showed that Black had several screws. It will be interesting when faced with a challenge that it cannot completely destroy.

Shinsuke Nakamura Def. Local Talent – I laughed like an idiot when Sammy Zayn lost her mind from the microphone over every single thing Nakamura did. He had a live microphone, and the crowd had no idea what to do with him, screaming with joy. It was fun.

Fire and desire def. Nicky Cross and Alexa Bliss – A bit of a fun match, but this split seems weird to me. Suffers from lack of depth. Fire and Desire were the title contenders, lost, left television … and returned as title contenders for the evening.

This is not perfect.

24/7 Shengigan Champions – If you had Bo Dallas with the winding in the boiler room, you win! Also … R-Truth dressed as a trunk with a lamp hiding from the throne of the King of the Ring? Did I see this correctly?

I really dug this episode. The King of the Ring really helped some middle cards find direction. Throw things from Bayley and Rowan reveal from above and you have a really fun show.