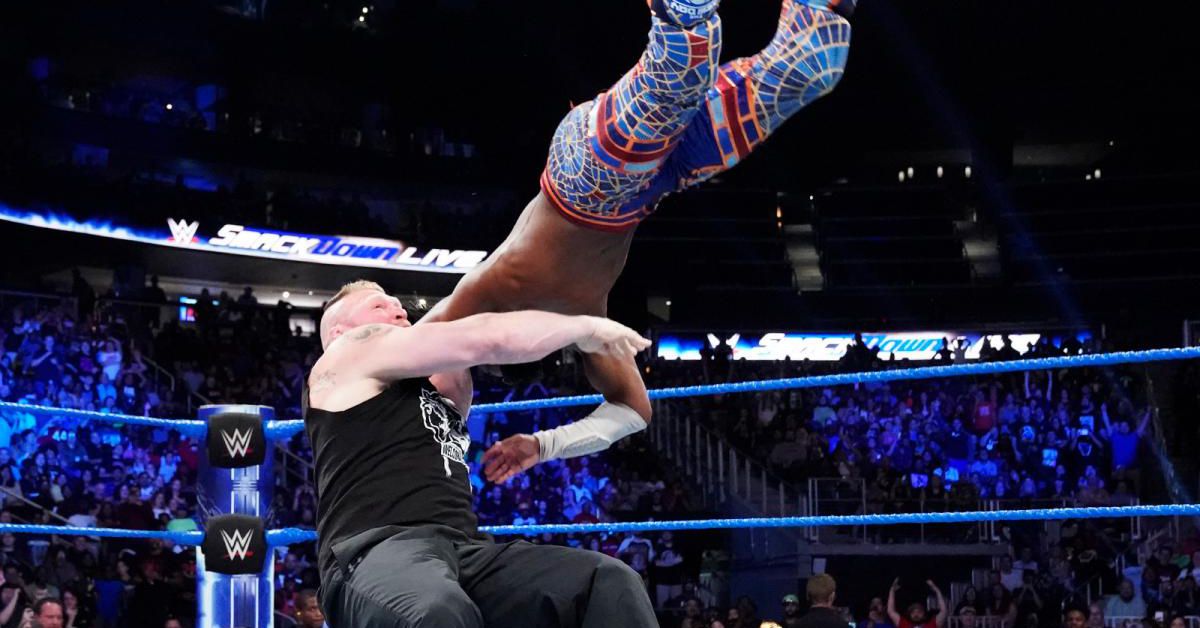 When SmackDown Opens a New Day Vs. Revival and Orton, I double-hit; have we not seen this coincidence in the upgrade with the Orton / Coffey Kingston feud?

One solid game later and it looks like Kingston has been missing the band forever. Given my fears that they might try to win another Kingston / Orton match, I was relieved. But wait – if Orton is out, who will be Coffey's next contestant?

This is a legitimate surprise and one that makes sense. Lesnar has not fought on WWE television for a long time; he's essentially behind the pay wall, and putting him on the billing of FOX's first show makes him feel special.

… Looks just like the Kingston title reign date, right? Watching Kingston during that look down was interesting. Big E was trying to get after Lesnar, but Coffey raised his hand and asked his friends to leave him alone. And while I can appreciate Coffey's confidence … what the hell are you doing, Champ?

Anyway, this should be fun. And given the fact that Coffey / Orton's feuds seemed to fade from some other programs, it also boosts Coffey's backup ̵

1; even if for one final fight.

I I'm almost sure I said last week – sorry, they move together at times – but Eric Rowan's perception of himself is so drastically different from reality. He made that very clear once again this week in an interview with Michael Cole.

Rowan was surprised that Cole even knew his name and boasted that he was smarter than Daniel Bryan and a leader, not a follower. Of course, my friend.

But this is also what makes it dangerous, to be honest. His ego and insecurity feed on each other. Where Brian thought he actually had a friend in his corner, Rowan felt underrated and neglected. Brian came out to end the show to express how hard he had been handed over to Rowan and Rowan had no time for any of it.

Brian claims that there is nothing that Rowan can do physically that can hurt more than betrayal and … well. Luke Harper leveled Brian and the kick went on. Roman Reigns came out to try to help, but Rowan and Harper were too many. They pulled Raines out of commission, laid out the concrete floor and put some guards on it, and finally let Brian through the table to close the show.

For the plus, Brian essentially received his apology from Reigns when he came out to help, so … silver lining?

Kevin Owens hits Shane McMahon with a case – KO has been fucked by Shane for a long time in the last month or two; I think we can all agree on that. But is the lawsuit angle really the result you wanted from all Shane's interventions?

See, if that causes Shane to leave the show, I'll shut up about that. But this is not very attractive to me.

King Corbin's memorials did not last very long – Strip, arrogant Corbin was a smug, arrogant Corbin. Short jokes are still something. Fortunately, Chad Gable's assault on Corbin's royal monuments went well with the crowd. But with what has been said after this long tournament … is that how it ends? At least I guess the enmity of all the work, I guess.

Charlotte Def. Sasha Banks via DQ – another moment in Bailey's moral background. First, the fact that Offset was there to represent Charlotte was pretty cool; However, I wish he was a bigger part of the show somehow. It was a really good match, as you might expect, but the story was how Bailey got involved and Carmela, a former girlfriend, went out to save Charlotte and physically with Bailey.

If your other friends turn to you, Bailey … this must tell you something.

Shinsuke Nakamura and Sami Zayn get revenge on Ali It was really just an excuse for Zayn to be a massive tool, while Nakamura hit Ali with Kinshasa when Ali was distracted.

Heavy Equipment Def. B-Team – You know what I really like about heavy machinery? They don't happen weird stories – honestly it's a little shocking considering who's on the team. They are just a weird, fun sight to enjoy for a few minutes.

The AoP vignette is re-released – I missed this in the review of Raw. My apologies. Yes, this new AoP corner is right up my alley. Malicious dudes wearing suits that have been banned by the MMA for being too cruel, calling out tag teams for being soft? Everything.

Pretty funny, I also got an ad for AEW during one of the trade breaks. It's still new enough to be a novel.

I liked this show better than Raw. He still has problems (Shane), but overall he was pretty solid.