Yakuza 7: wilder than ever, also now a kart racer 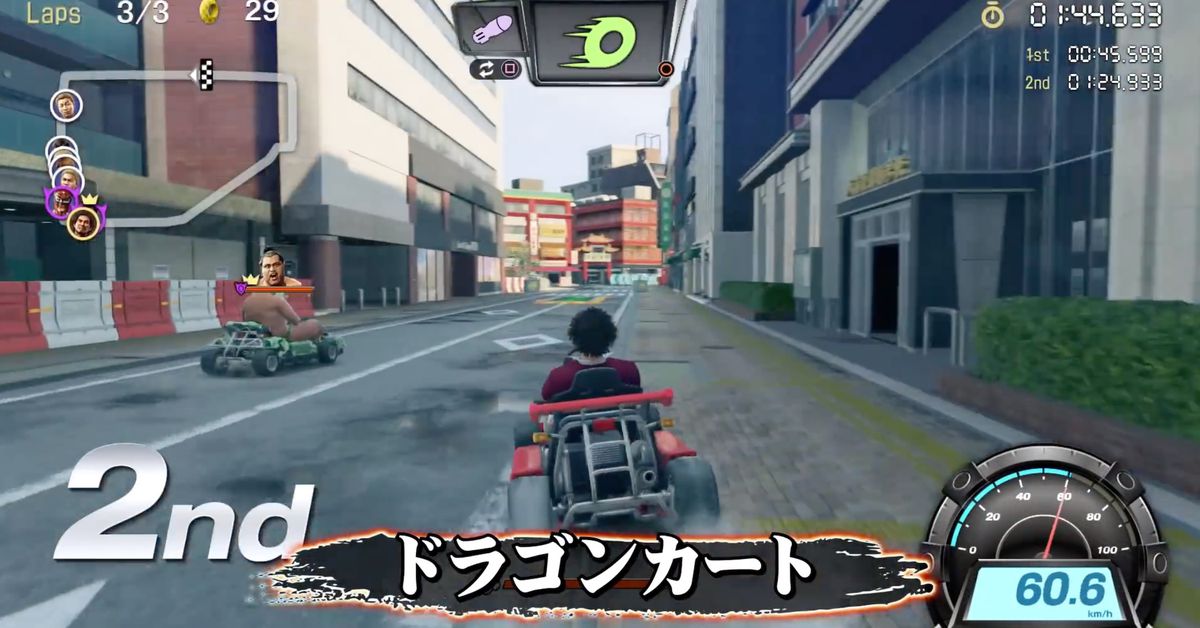 Yakuza 7 – or to be precise, Ryu ga Gotoku 7 which means “ Like a Dragon 7 ,” which will drop the “7” and go by Yakuza: Like a Dragon in the West for some reason – made its public debut today at the Tokyo Game Show. It was my first chance to see how its controversial shift to a JRPG-style menu-based battle system would actually play out in reality.

The first, though, comes our introduction to a new protagonist, the wild-haired Ichiban Kasuga, and it's clear that Like a Dragon 's JRPG infatuation goes beyond the combat. Kasuga has spent 1

8 years in prison after taking a fall for a yakuza boss, and after getting betrayed by his former family upon release, his first task is to find a job. Once he pulls a mysterious baseball bat out of the ground that his friends were unable to shift, he gains the job class of “hero.” Because he likes Dragon Quest .

A new trailer released today makes it clear that Like a Dragon will feature multiple job classes that grant your characters different abilities, meaning a better title might have been Yakuza 7: Like Final Fantasy V . The host class, for example, gives you gaudy attire and attacks involving flowers and champagne. The "dancer" class, meanwhile, lets you deal damage with breakdancing footwork while dressed like John Cena.

Just to be super clear here, Like a Dragon 's battle system is completely bananas. The interface is a reminiscent of Persona 5 with top-level categories spinning out on one side of the screen before you dive into sub-menus, but the combat plays out in real time, and special attacks can be as elaborate as anything you've seen in more fantastic RPGs. One devastating technique involves your homeless buddy launching himself into the air, taking a swig of whatever-knows-what from a bottle, and raining down hellfire on your unfortunate gangster opponents. Kasuga's RPG infatuation also occasionally causes him to view regular human enemies as distorted, hulking monsters, much to his friends' confusion.

I'm sure there will still be people who are disappointed at the move to what is essentially turn-based combat, but Like a Dragon 's battles feel as dynamic as the series has ever been. The camera shifts smoothly from party members to combatants with cinematic framing, and everything plays out quickly so that the transitions from exploration to battles will feel jarring. Today's demo wasn't anywhere near enough to evaluate the depth of the system, but I'm optimistic that it'll be a fun new twist on Yakuza combat.

You can see how it works in this new gameplay trailer:

Watch that trailer long enough and you'll come across details of Like a Dragon 's new side activities, which look to be the most extensive in the series to date. For example, there's a surprisingly full-featured Mario Kart clone called "Dragon Kart" that sees Kasuga bombing around Yokohama in a go-kart. Yakuza has always been about hanging out and doing ridiculous things in Japan as much as it's been about taking down crime lords, and I'm always happy to see the tradition get taken to the next level.

Yakuza: Like a Dragon is looking good. The seven games starring Kazuma Kiryu (including Yakuza 0 ) would be a hard act to follow even without switching to an entirely new style of combat, but my time with Ichiban Kasuga's debut gave me confidence that Sega can stick the landing. Comes out in January in Japan, and a Western release is set for sometime in 2020.