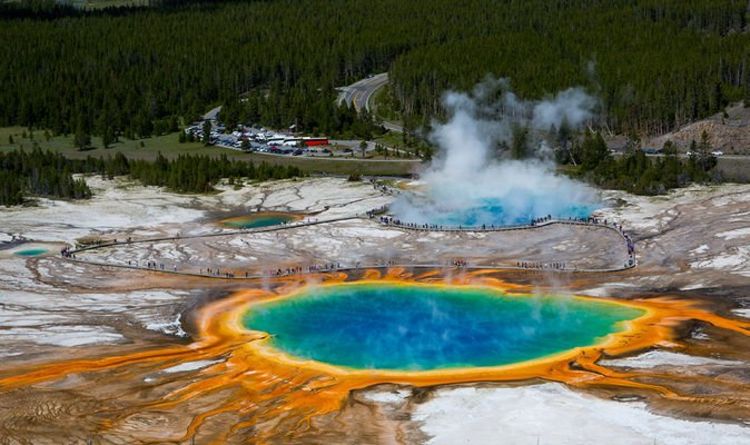 In 1871, Ferdinand Vanderveer Hayden led a team of 50 keen geologists on the first exploration of the Yellowstone volcano

In 1871, Ferdinand Vanderveer Hayden led a team of 50 keen geologists on the first exploration of the Yellowstone volcano. Mr Lowenstein revealed how the team gathered information on the supervolcano

He said in 2014: "Ferdinand Hayden was one of the people who ran the expedition that went through Yellowstone

" They collect d samples, they documented what they were seeing and they did it both through photography and paintings.

"They were sent back to Washington and were instrumental in having Congress set aside Yellowstone as a national park."

Mr Lowenstein also revealed how Mr realised it was a volcanic area.

He added: "He recognized it was a volcanic area and he knew it was not too long in the geological past that it was active.

"They experienced what we now call a earthquake swarm, where they were awakened in the middle of the night by a series of shocks that shook the trees . "

The revelation comes after Mr. Lowenstein's colleague and Scientist-in-charge Mike Poland sent a warning over a plan by NASA.

The idea could apparently save the world and cost around £ 2.7billion

However, Mr Poland did not back it

He said in 2018: "There are no plans to actually do that, it was just a plan in concept.

"But there is no plan to do any drilling at Yellowstone and I can not imagine it would ever be allowed as it is a national park.

Mike Poland did not back the NASA plan (Image: USGS)

] He added: "It would have the potential drawbacks of affecting all of the natural features at Yellowstone.

Con cerns have grown recently over the potential that Yellowstone could erupt again from the public.

However, Mr Poland shut down these claims during a weekly update from USGS.

The scientist said: "We've heard many statements that Yellowstone is overdue – that it has a major eruption every 600,000 years on average, and since the last eruption was 631,000 years ago, well, you can see where this is going

"Is this true? In a word, no. In two words, no way. In three words, not even close. Yellowstone does not work that way. "

Calculating that Yellowstone erupts roughly every 600,000 years has led many to claim the supervolcano is" overdue "

The scientist explained: "This comes out of an average of about 725,000 years between eruptions

"That is the case, we still have about 100,000 years to go, but this number is based on very little data and so is basically meaningless."

"The point , however, is that if someone, or some article or documentary, says that Yellowstone erupts every 600,000 years, you know right off the bat that they are full of baloney. "