“You are important and you are needed”: Ogden, a survivor of breast cancer, urges women to enter regular screening 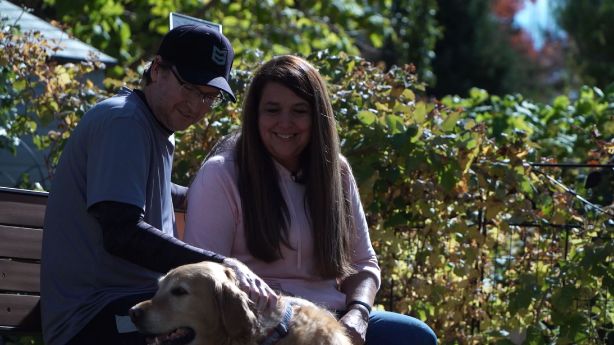 SOUTH FIRE – Due to the pandemic, many organized group walks for Breast Cancer Awareness Month were canceled this year, but that did not stop those who are passionate about the cause to show support. One Ogden couple is still finding ways to take steps against breast cancer.

Jeff Callister’s recent love of running is more than just a sport. He competes in the 35-kilometer breast cancer challenge sponsored in Utah by the American Cancer Society and is raising funds and awareness for thousands of women, including his own wife Linda Callister.

She was diagnosed with breast cancer nearly four years ago when she was 49 years old.

“Well, shocking. I mean, you never want to hear about someone diagnosed with cancer, let alone someone as close as a wife, a husband,”

Between them, they have 10 children. The youngest was only 8 at the time. Jeff said his thoughts were racing.

“What if this cancer takes her? What about these kids? How am I going to continue without her, actually?” he said. “This little girl needs her mother and those thoughts are scary.”

Linda goes for a mammogram every six months because doctors found non-cancerous masses in one of her breasts, which they removed.

“Once I was cleared, I felt something with mammography and ultrasound that just didn’t look normal,” Linda described.

Although she had a normal mammogram only three months before, she knew something was wrong and insisted on additional screening.

“Within a few weeks, I finally had a double mastectomy (and reconstruction),” she said. “It was super hard.”

However, Linda says it could be worse if she did not pay attention to her body and sought emergency medical care, who agreed to do additional screening, even though she had only been seen three months earlier. Thanks to early intervention, Lynda avoids chemotherapy and radiation.

Linda doesn’t know what would happen if she postponed her treatment.

“As mothers, as women, we are so busy and we like to push things aside,” she said. “If I hadn’t come in when I was (and was) that the doctor (didn’t) trust my instincts at the time, I could easily have pushed him away and I don’t know what the outcome would have been.”

“We have to go in and do a screening just like before,” she explained.

Tittensor says that for women like Lynda who find a lump or notice a change, screening should also include an ultrasound and a medical examination. Although mammography screening is an excellent screening tool, she says she may not take everything if the woman has thick breasts or if there is a subtle change.

While most breast cancers grow quite slowly, Tittensor says there are cases like Lynda’s story where a lump may appear just a few months after a mammogram if the site was tiny during the screening.

As early as March, there was a brief period when most hospital systems in the country stopped performing screening tests, but Tittensor says they have realized that, like COVID-19, breast cancer is a persistent problem that cannot be ignored.

Tittensor says Intermountain Healthcare clinics are taking increased safety measures, such as scheduling appointments to reduce the number of people in the waiting room, offering contactless entry tools and wiping surfaces between visits.

She says there is no reason to delay the screening. “It’s important all year round and it’s really easy to do. It could be the difference between having a little glimpse in your life or being a basic life-changing experience,” she said.

It also encourages women to take a monthly breastfeeding exam. She says cancer is often identified when a patient feels something different. “You know each other better than anyone else. You are the one who is routinely checked,” she said.

“Don’t ignore it because we’re more aware of ourselves than we sometimes deserve,” Linda said.

Tittensor says that breast cancer is really genetic in only about 10% of women. Although she says they don’t know exactly what the other 90% make up, she says healthy living plays a role.

Jeff finished the 35 miles earlier this week and will continue to run this month in support of those who can’t run alone.

“I couldn’t be proud of him because he’s not afraid to stand with me and just support me,” she said. “There will be good days and there will be bad days and he is there, whether the days are good or bad, and I appreciate that so much.”

Even in her own time of need, Jeff said Linda had always been more worried about others than herself.

“She’s the counselor, she’s the caretaker. She’s the one who just takes everyone and everyone to help,” he said.

Although women often wear a lot of hats, Linda is grateful that she paid attention to her own health.

“We can’t do good for others if we don’t help each other first,” she said.

“If we feel something is wrong, we need to do something about it,” Linda added. “Advocate for yourself because you are important … and you are needed.”